No car is designed to appeal to every single person, and the Volt is no exception. It’s designed mostly to appeal to a specific kind of driver: someone who does the great bulk of their driving around town, maybe 20 or 30 miles a day at most, but occasionally needs to drive further and doesn’t want to buy a second car just for those occasions. There are lots of people like that, and for them the Volt is great. They’ll spend 98% of their time running solely on battery power and recharging at night when rates are low, and 2% of their time getting 37 mpg — which is actually pretty damn good. There are a few hybrids that do slightly better and one hybrid (the Prius) that does a lot better, and that’s about it.

Even after the government rebate, it’ll run you around $33,000 for a car that would cost less than $20,000 with a standard engine. Until the price of the car comes down, it’s going to be a tough sell for anyone who’s not dazzled by its eco-friendliness.

Even at upwards of $3 a gallon, $13,000 buys a hell of a lot of gas.  Even for someone like me, who is currently driving a relatively poor mileage vehicle (a 350Z Roadster) and fits the basic profile (I use my car as a daily commuter and errand mobile; the wife’s minivan is the long haul vehicle) it wouldn’t make sense to switch. 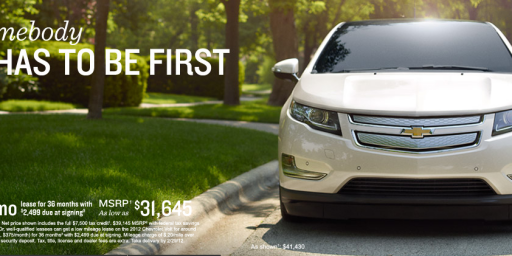