Douglas Gantenbein asks a question I’ve posed to myself more than once, “Why do you still need an agent to buy a home?

Americans will spend about $1.14 trillion buying 6 million homes this yearÃ¢€”both records. Yet the flat commissions paid to the realtors who handle the vast majority of those sales, averaging 5.1 percent, act as an enormous tax on the transaction process, taking wealth from both buyers and sellers in what for both is often the biggest financial transaction of their lives. It’s true that selling a house is a complex task. But so is writing a will, and an attorney doesn’t ask for 5 percent or 6 percent of your net worth as compensation.

But the real knock on realtors is a bit of simple economics that many people don’t understand. Whether you’re buying or selling, they rarely work in your interest. For the buyer, a realtor may seem like a dreamÃ¢€”a “free” home-finding chauffeur, who then negotiates the best possible price. But the service isn’t freeÃ¢€”the sellers have likely factored the buyer’s agent’s 2.5 percent or 3 percent of the take into their price. Moreover, it’s in the buyer’s agent’s interest to have you pay the most that you’re willing to pay. After all, the higher the price, the larger their commission.

What about the sellers? They know only too well the service isn’t freeÃ¢€”they’re stuck paying the commission for their own agent plus the buyer’s. But “their” agent really isn’t interested in seeing the seller get the best possible price. Instead, that agent’s incentives favor a quick sell, at any price. Look at it this way: Let’s say you’ve listed your home for $290,000, and you owe $150,000 of that to the bank, leaving you with $140,000 in equity. The home may well sell for that $290,000Ã¢€”in a few months. But if the agent can persuade you to sell it for $270,000 in a few weeks, he is better off having forgone only $500 or $600 in commission while saving a great deal of time, energy, and uncertainty. That deal, though, will cost you $20,000 in equity. When we sold the Newcastle house, in fact, “our” agent actively worked against us in the final stages of the transaction, doing more than the buyer’s agent to knock down our price.

Excellent points all. I’ve bought two homes and sold one. My experience as a buyer was largely positive. The first realtor I had was a nice guy but absolutely incompetent (he showed me homes seemingly randomly, totally ignoring my rather clear specifications as to what I was looking for and showing me houses well below and well above my price ranges) but that was simple enough to determine and I quickly fired him. The next realtor was superb, found me a house on the first morning, and helped me get through the rather daunting process. I used her to sell the same house four years later. My realtor here was absolutely superb.

Clearly, realtors perform a valuable service and a good one is certainly worth paying for. If they’re any good, they know the market and can steer an unsuspecting buyer away from some huge pitfalls. The problem, as Gantenbein suggests, is that it’s insane to pay a commission on the order of 5% for a what amounts to 12-15 hours of work. A starter townhouse in this area is now in the neighborhood of $350,000 and even a modest house is $500,000. Is the realtor’s service really worth $25,000?

Gantenbein suggests that the answer is the widespread use of a “For Sale by Owner” model with the help of the Internet. While that has basically happened with much of the economy, real estate has resisted change.

Why the fossilization? Mostly, it’s because of the power of the National Association of Realtors, which protects its members’ turf like a crazed wolverine defends its offspring. The organization has defeated efforts by some of the nation’s biggest banks and even Microsoft to start their own real-estate listings, and have largely protected the sanctity of the Multiple Listing Service, enabling regular folks to scan bare-bones listing on the Web, but keeping most of the good info for themselves. Overall, the NAR has ensured that nearly all residential real-estate transactions still are conducted between two agents in cahoots. And they’re largely responsible for keeping commissions close to that 6 percent level when any normal law of competition would suggest they’d be lower.

Still, I’m hoping that upstarts such as ZipRealty, LendingTree, Foxtons (a discount broker in the Northeast), and Catalist (a California discounter) will soon blow away the traditional realty transaction model like they’re Puerto Rico playing the U.S. men’s basketball team, dropping total commissions on a house sale to 3 percent, or even 2, while still offering the services people seem to desire from a realtor. Certainly, most people realize that a 6 percent commissionÃ¢€”or even 5 percentÃ¢€”is nuts, given that e-mail alerts, Web-based home tours, and other services can easily give buyers and sellers as much information as their realtors. It will be a painful change for the 1 million real-estate agents out thereÃ¢€”alas, a number that is growing rapidly. But a little Darwinism is needed to thin out the herd, and when it happens it won’t give me much grief.

My hope is that, instead of putting most realtors out of work, the result would be a more realistic fee structure. Realtors provide a valuable service. Just not one as valuable as the current system suggests.

Is It Better to Buy or Rent Your Home? 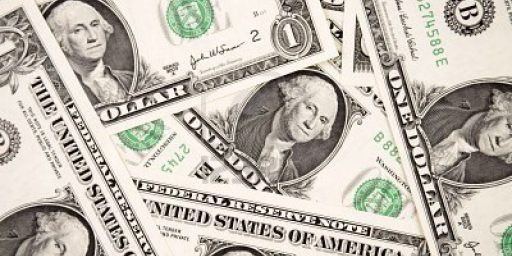 Louisiana Makes It Illegal To Use Cash To Buy Used Goods

Supreme Court: Yes, It’s A Crime To Lie When You’re Buying A Gun