A Dose Of Reality About The Florida Straw Poll Results

While pundits continue to draw conclusions about the Florida GOP’s Presidential 5 Straw Poll over the weekend, this chart (via Wikipedia) is worth considering: 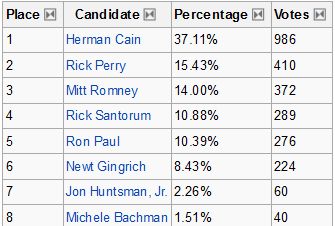 Before we draw vast national conclusions from this thing, it’s worth keeping this in mind.