The GOP is dominant in the Southern United States, but it's unlikely to last as long as Democratic dominance of the region did. 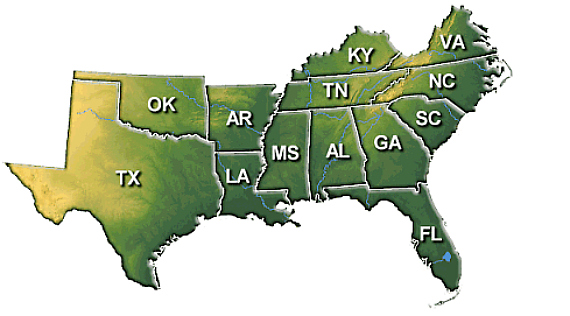 After last Tuesday’s elections, the South is more solidly Republican than it has ever been, and only seems likely to become more red in the future:

With the walloping Republicans gave Democrats in the midterm elections, the GOP stands one Louisiana Senate runoff away from completely controlling Southern politics from the Carolinas to Texas. Only a handful of Democrats hold statewide office in the rest of the Old Confederacy.

The results put Southern Republicans at the forefront in Washington – from Senate Majority Leader-in-waiting Mitch McConnell of Kentucky to a host of new committee chairmen. Those leaders and the rank-and-file behind them will set the Capitol Hill agenda and continue molding the GOP’s identity heading into 2016.

In statehouses, consolidated Republican power affords the opportunity to advance conservative causes from charter schools and private school vouchers to expanding the tax breaks and incentive programs that define Republican economic policy. The outcome also assures that much of the South, at least for now, will remain steadfast in its refusal to participate in President Barack Obama’s health care overhaul.

“I think these new leaders can help drive the conservative movement” at all levels, said Louisiana Republican Party Chairman Roger Villere, echoing the celebrations of Republican leaders and activists across the region. “We just want a government that doesn’t suppress people.”

Republicans widely have acknowledged that the party now has to prove it can govern. But one-party rule invariably means internal squabbles. Republican White House hopefuls in particular must court Southern Republicans who are more strident than the wider electorate on issues ranging from immigration to abortion and the broader debate over the government’s role – and how to pay for it.

“The Republican presidential nomination will run through the South,” said Ferrel Guillory, a Southern politics expert based at the University of North Carolina. “As Mitt Romney found (in 2012), that … makes it harder to build a national coalition once you are the nominee.”

Republicans reclaimed the governor’s mansion in Arkansas and held an open Senate seat in Georgia that Democrats targeted aggressively.

In January, the GOP will control every governor’s office, two U.S. Senate seats, nearly every majority-white congressional district and both state legislative chambers in North Carolina, South Carolina, Georgia, Alabama, Tennessee, Mississippi, Arkansas and Texas. Landrieu and Florida Sen. Bill Nelson are the only officials keeping their states from the list. At the northern periphery of the South, Kentucky’s Legislature remains divided, and Democratic governors in Kentucky and West Virginia are in their final terms.

As a preliminary matter, it’s important to define what we mean by “the South.” The Census Bureau defines it as the States of the Confederacy, plus Delaware, Maryland, Washington, D.C. West Virginia, and Oklahoma. Today, the idea that Maryland or Delaware are part of what we think of as “the South” would likely seem odd to most Americans, as would the inclusion of Washington, D.C. or even West Virginia. Technically, all of these states are part of the historic “South” because they are south of the Mason-Dixon Line, which is at the border between Maryland and Pennsylvania. Culturally and politically, though, the idea that these parts of the country are “southern” seems strange, and even the inclusion of Virginia as a “southern” state sometimes seems odd if you judge the state as a whole by Northern Virginia and the growing influence that region has on the politics of the state as a whole. For purposes of this post, though, let’s presume that the “South” consists solely of the states of the Confederacy, plus Kentucky, which stayed in the Union, and Oklahoma, which remained a territory largely under the control of the Union throughout the Civil War. When you look at the South in this matter, Republican dominance is clear, even though there are some exceptions that suggest that it may not last for long.

Much of this, of course, is the culmination of a process that began more than 40 years ago when Republicans consciously began to appeal to conservative, white, Democrats in the South as way to counter the rising Democratic power bases in the urban centers of the Northeast and Midwest. At the Presidential level, it provided to be a quick success. Unlike 1960 and 1968, 1972 saw President Nixon win every state of the old Confederacy, although the fact that this happened in the midst of a nationwide landslide made possible in part by the disarray in the Democratic Party that put George McGovern on the top of the ticket obviously contributed to what happened. Democrats pushed back in 1976 and won most of the South by selecting a nominee from a southern state, and showed similar success in winning southern states when they did the same thing in 1992 and 1996. The elections of 1980, 1984, and 1988, however, showed quite clearly that Republicans were consolidating their control over the South after a long period of Democratic control that was only briefly interrupted in the wake of the Civil War by Reconstruction Era politics that allowed newly freed slaves to vote. By 2000, Republican control of the Presidential level seemed  to be largely assured and, except for victories by President Obama in Virginia (which in many ways is becoming less of a “southern” state than it used to be) in 2008 and 2012, North Carolina in 2008 by a narrow margin, and Florida in 2008 and 2012, that part of the country has been solidly red for Republican candidates for President ever since, and is likely to remain so for the foreseeable future, putting at least 133 Electoral Votes, and potentially an additional 42 from Florida and Virginia, which will arguably be more in play in the future with President not on the ballot, in that column as well.

The better indicator of the GOP rise in the South, though, can be seen below the Presidential level. As noted above, at the moment there are only two Democratic members of the Senate representing states south of Virginia, Ben Nelson in Florida and Mary Landrieu in Louisiana, with Landrieu seeming likely to lose her runoff election on December 6th. At the Congressional level, Republicans dominate the Congressional delegations in Alabama, Arkansas, Florida, Georgia, Kentucky, Louisiana, Mississippi, North Carolina, Oklahoma, South Carolina, Tennessee, Texas, and Virginia. In many if not all cases, the Democratic Members of Congress in these states are minorities who represent districts that have been drawn to comply with the Voting Rights Act and Justice Department guidelines to ensure at least one “majority minority” district in each of these states. Digging deeper, as noted, Republicans have even further solidified their control over Governor’s Mansions and state legislatures, although there remain many holdouts there where Democrats are holding on, one notable case being Kentucky where Democrats continue to be strong at the state level even though the GOP dominates at the Congressional, Senate, and Presidential levels.

As a general rule, though, we have now reached the point where the South, once the center of the Democratic Party’s power base, is now serving a similar role for the Republican Party. Much like it did for Democrats, this control of the South has noticeable effects on the GOP as a whole, pushing the party to the right in a variety of political and cultural ways that may not necessarily be helping it nationwide. It is, after all, the south that is the major source for the social conservatism that defines the GOP, and arguably also a heavy influence on the GOP’s position on foreign policy thanks in large part to a culture that can fairly be described as very pro-military. Especially on social issues, the south remains very different from other parts of the country, especially the Northeast and Pacific West, and the influence that southern dominance on the Republican Party has in that area is a rather obvious anchor on efforts to grow the party in these parts of the country. Additionally, the GOP’s continued need to adhere to a Southern, white, conservative constituency makes reaching out to minority groups and the young without being seen as abandoning the party platform quite difficult indeed. Eventually, Democrats found that their own dominance in the South hard to reconcile with the growing power of minority and younger voters in the Northeast, Midwest, and elsewhere inside the party. Fissures in that regard began to show up as early as 1948 when Strom Thurmond led delegates from most of the South out of the Democratic Convention and ran on an independent “Dixiecrat” ticket that nearly denied President Truman re-election by winning some 39 Electoral Votes even though he only captured 1.1 million popular votes. At some point, one wonders if something similar could happen to the GOP.

That last question, of course, is the interesting one, because it’s unclear just how long the GOP’s dominance in the South will last. Virginia is already a purple state thanks in large part to the fact that population shifts have led to the dominance of Northern Virginia as a political force in the state that tends to push it in a less conservative direction. Florida is also a state that is arguably on the bubble thanks to the same migration from the north and the rise of a Latino population that, for now at least, remains largely Democratic. Many anticipate that Georgia and North Carolina will soon join Florida and Virginia on the list of purple states in the south for largely the same reasons, although the last two election cycles in both of those states suggest that it will be some time before that happens. Between them, those four states account for 73 Electoral Votes and losing them as a reliable base in a Presidential election would be a serious problem for the GOP going forward. Some more optimistic Democrats, meanwhile, dream of the day when Texas and its 38 Electoral votes will be realistically up for grab for Democrats, who have not won the state since Jimmy Carter ran for President in 1976 but that seems like something that’s unlikely to happen for quite some time to come. In any case, though, while the GOP has achieved something historic in the manner in which it has turned the South, which had been a sea of blue in American politics since before the Civil War, into the base of the party that was formed in no small part to resist the very institution that defined the ante bellum South. It seems unlikely, though, that this dominance is going to last nearly as long as Democratic dominance in the region did.