A new poll shows that Donald Trump could end up having an impact on the race for Virginia Governor.

The latest poll of the Virginia Governor’s race appears to show that President Trump is having an impact on the contest between Republican Ed Gillespie and Democrat Ralph Northam, who currently serves as the state’s Lieutenant Governor:

RICHMOND — President Trump looms large over the race for Virginia governor, according to a new survey that finds the president is a factor for a sizable slice of the electorate.

For nearly 40 percent of voters, Trump plays into the choice between Democrat Ralph Northam and Republican Ed Gillespie, according to a poll released Tuesday by the Wason Center for Public Policy at Christopher Newport University. For 28 percent of voters, the president is a major factor.

The “Trump effect” is more pronounced among Northam voters, who are much more likely to disapprove of the president and to say their vote is meant to send a message to Trump and congressional Republicans.

“Disapproval of Trump and Congress is clearly motivating Northam’s voters,” said Rachel Bitecofer, assistant director of the Wason Center. “Gillespie voters mostly support Trump, but they’d rather keep him out of the picture here.”

A 51 percent majority of Northam voters say Trump plays into their choice for governor, while 72 percent of Gillespie voters say he does not. Among independents, 78 percent say the president is not a factor.

Northam, the state’s lieutenant governor, is a pediatric neurologist who earned a reputation for working across the aisle as a two-term state senator. While touting his bipartisan credentials in this race, he has used uncharacteristically sharp rhetoric against Trump, calling the president a “narcissistic maniac” in a TV ad.

Gillespie, an establishment figure who nearly unseated Sen. Mark R. Warner (D) in 2014, has walked a fine line with Trump, whom he supported only grudgingly after the real estate developer and reality TV personality locked up the GOP presidential nomination last year. Gillespie — a former lobbyist and Republican political operative who served as a counselor to President George W. Bush and as chairman of the National Republican Committee — has avoided appearing with Trump and commenting on his presidency

But Gillespie also has taken steps to court Trump voters since nearly losing the June GOP primary to Corey Stewart, the president’s one-time Virginia campaign chairman who made the defense of Virginia’s Confederate monuments the cornerstone of his populist campaign. Gillespie has used images of a massive border wall and handcuffed undocumented immigrants in some ads. And he has hired a veteran of the Trump and Stewart campaigns, who warns that communists are behind the push to remove monuments, as his field director for Southwest Virginia.

The poll also asked voters about the impact of the violence in Charlottesville and the Confederate monuments issue:

The poll found that there could be a “Robert E. Lee effect” at work in the race, with 54 percent of voters opposed to removing monuments from public spaces. Sixty-two percent of Northam voters support removal, while 86 percent of Gillespie voters oppose it.

“It’s clear this is a more complicated issue for Northam than for Gillespie,” said Quentin Kidd, director of the Wason Center. “Gillespie appears to have a Donald Trump problem, but Northam may have a Robert E. Lee problem.”

The poll also finds that 44 percent of voters say Virginia is moving in the right direction and that 51 percent approve of the job that Gov. Terry McAuliffe (D) is doing. McAuliffe is prohibited by the state Constitution from seeking back-to-back terms.

Looking at the race as a whole, the poll average shows that Northam appears to have the lead in the race, but the outcome is far from certain. The RealClearPolitics polling average shows Northam with an average of 45.8% while Gillespie stands at 41.4%, leaving an average of 12.8% of voters either undecided or supporting another candidate. With regard to that last point, as was the case in 2013 there is a Libertarian Party candidate in the race that could be having an impact on the vote for both candidates. In that case, though, the Libertarian nominee in question, Robert Sarvis, was benefiting in no small part from the fact that the two major party candidates, Democrat Terry McAuliffe and Republican Ken Cuccinelli, both had significant negatives in their record that turned off voters. Sarvis ended up getting more than 6.5% of the vote, although it’s unclear if his presence in the race actually had an impact on the outcome since post-election polling indicated that a large number of Sarvis voters said they would have voted for McAuliffe if Sarvis was not in the race. Cliff Hyra, the LP nominee for 2017 probably won’t benefit from the same phenomenon since public opinion about both Gillespie and Northam appears to be far more positive.

The RCP polling chart shows both candidates seeing their numbers going up, but Northam appears to be doing better in that regard: 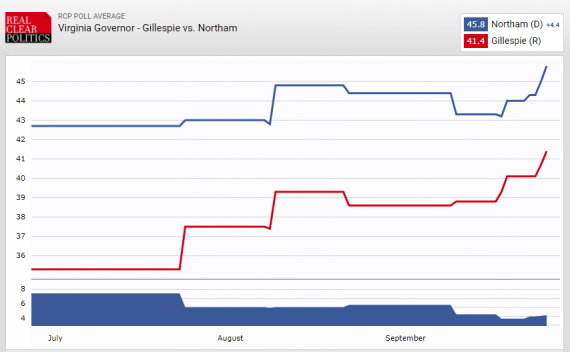 The unknown factor is what impact President Trump will have on the race.

Trump lost Virginia in the 2016 Presidential election by more than 200,000 votes, making last year the third consecutive time that the Commonwealth has given its electoral votes to the Democratic candidate after having gone to the Republicans in every election from 1968 going forward. This margin was larger than the margin by which Mitt Romney lost the state in 2012, and only slightly better than the losing margin suffered by the McCain/Palin ticket in 2008 when Barack Obama became the first Democratic candidate to win the state in four decades. In addition to those victories, Democrats managed to win all three statewide races in 2013, something that no party had done since the 1970s, and they hold both of the state’s seats in the U.S. Senate. At the same time, Republicans continue to hold the majority of the state’s seats in the U.S. House of Representatives and also control the Virginia State Senate by a narrow margin and the House of Delegates by a wide margin. For this reason, the Commonwealth is still very much a “purple” state, although the Democratic Party appears to be continuing to gain strength, a trend that could increase in speed depending on the outcome of November’s election.

It’s still early in the race, of course. Debates between Gillespie and Northam are just beginning, and those could prove to be crucial in determining who has the momentum going into the final month of the race. If history is any guide, though, this could be another good year for Democrats. As a general rule, the outcome of the Virginia Governor’s race has tended to go the opposite of the outcome of the national Presidential election. Specifically, the winner of the race for Governor of Virginia has tended to be from the opposite party of the party of the candidate who won the Presidency the year before in a trend that began in 1977 when Republican John Dalton defeated his Democratic opponent just one year after Jimmy Carter was elected President. The only year since then where this hasn’t been the case was four years ago when McAuliffe narrowly defeated Ken Cuccinelli the year after Barack Obama was re-elected. In many respects, this is largely coincidental, but it does seem to show that Virginia has a historic tendency to go against the prevailing political winds when it comes to selecting a Governor. That, along with the polls, could be bad news for Republicans.