About that Tyrannical Escrow Fund…

The escrow fund was a big negative for BP, yes?

As James Joyner notes this morning, some commentators are objecting rather strenuously to the $20 billion escrow fund that was established to help pay claims made on BP in regards to the effects of the oil spill.

However, something that I have only heard once in passing that ought to be noted in regards to the fund in question and used to evaluate it (especially in regards to tyranny) is that the market response to the fund was for BP’s stock to climb rather precipitously.  If one looks at the charge above (source) and one notes the “H” down in the stock price’s post-spill valley, that marks when the escrow account was announced.  One will further note that the stock price climbs rather substantially soon after that announcement.

Now, it is rather clear that Wall Street didn’t see the fund as the thin edge of the tyranny wedge. Rather, the market saw the fund as a sign of BP’s financial stability in the face of the challenges associated with the cleanup costs.

Certainly the fact that the market responded positively to the fund does not make it good, but it does suggest that many  who understand the economic implication the fund considered it to be a positive in an otherwise very difficult situation. 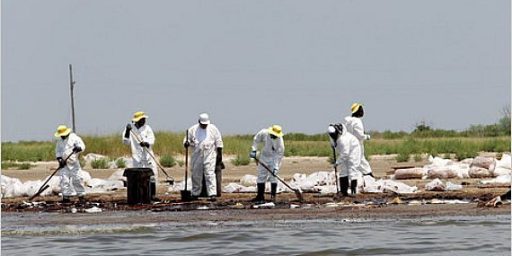