A decade after the Great Recession, we now have data to answer the question.

Back in 2009 there was considerable debate about the efficacy of fiscal stimulus. In particular there was some discussion about the possibility of a “unit root” problem. The “unit root” problem is that the U.S. had invested too much in things like housing and human capital related to the financial industry. The problem is that these kinds of investments cannot be easily unwound—i.e. you can’t use a house to make cars, or tractors or grow soy beans. And human capital once acquired cannot be “un-acquired”. That is, once the human capital is acquired it cannot be simply re-tasked like a drill press or a forklift can be re-tasked.

Of course those in favor of fiscal stimulus poo-poohed the idea. In fact, Paul Krugman called the very notion of suggesting a possible unit root as evil. Brad DeLong indicated the idea warranted no consideration. That there was tremendous excess capacity in the economy and all we needed was for government spending to get things going again. Krugman in particular argued in rather Cheney-esque form that in terms of spending there really was no effective upper bound worth considering. That in the end we’d end up “owing the debt to ourselves” and so should spend until the economy started growing again. Deficits don’t matter and all that.

But now, almost 10 years on perhaps we can evaluate the validity of the claim of a “unit root” problem. The basic idea of a unit root problem is that when there is an “innovation” that the effects are permanent. That is, in the case of 2008 the lost GDP would be permanent. Or to put it differently any deviation from the trend would be permanent. The alternative view is that the economy is a trend stationary process, that is, any deviation from the long run trend is temporary and we’d return to the trend.

I went to FRED and downloaded the real GDP data for the United States and took logs of the data. When the data is suggesting an exponential pattern taking logs “linearizes” the data and allows those interested in doing empirical work to utilize linear methods like regression analysis. The real GDP data is shown in the graph below, 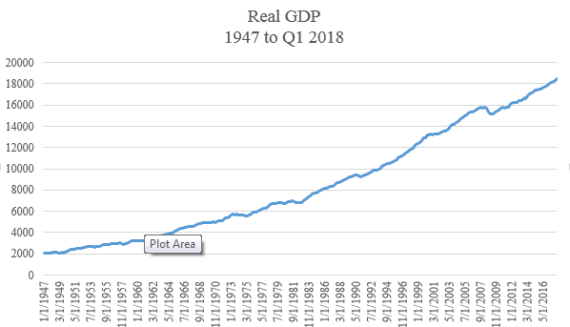 The data is from Q1 1947 to Q1 2018. The National Bureau of Economic Research has dated the start of the Great Recession as December 2008, almost 10 years’ worth of data.

To evaluate the validity of the unit root hypothesis I ran regressions assuming that the trend stationary hypothesis is true. That is the true model is depicted by,

This is a trend stationary model. An alternative to this model is,

With a trend stationary process deviations from the trend are stationary and are due to the last terms in the equation above which is usually white noise or at least a random process. That is, after the deviation the process returns to the trend line. What causes one of these deviations? One possibility is an expectation of a bad (or positive) event that fails to materialize. Of if it does materialize the consequences were over blown. Once past that event people realize their error and things return to “business as usual” and we return to the long run trend.

The interpretation of a unit root is that we had too much investment in both housing and human capital related to both housing finance and possible finance in general. Why this is a unit root is that when it comes to human capital we cannot “unwind that position” quickly nor easily. Something like a lathe is useful in a variety of industries and when it is not being used in one industry it can be used in another. In the trend stationary world this is unused productive capacity. However, human capital is often specific to the industry in question and cannot be easily separated from the individual and sold to another party like physical capital can. In fact, it is also the case that human capital may be specific to a given firm and when that firm goes out of business that human capital is now essentially useless. And when it comes to housing an over investment in housing does not usually result in firms tearing down houses and trying to use those resources elsewhere. Broken wood and crushed stucco do not have much value in a secondary market. So, instead of a temporary deviation from the trend we have a permanent deviation from the trend.

If we are in the “unit root” scenario what does that mean? It means that a deviation from the growth trend is largely permanent barring a future deviation that moves back to or above the previous growth trend. What evidence is there supports the unit root hypothesis? Well here is the graph of GDP that extends trend prior to the recession and financial crisis. 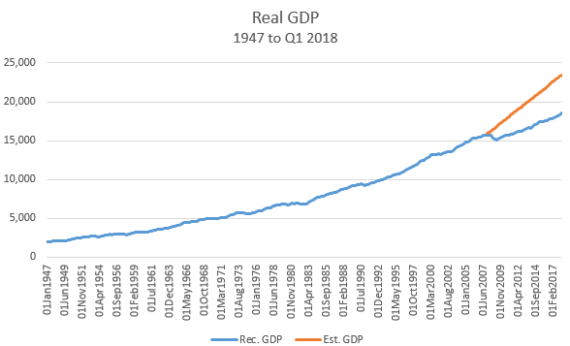 As can be seen the pre-crisis trend would have resulted in considerably higher GDP than we currently have. Current GDP as of Q1 2018 is $18,515 billion. If the trend above had continued GDP would have been $23,490 billion. Of course, estimating these kinds of models is as much “art” as it is science. For example the above has an auto-regressive error term. This error term does seem to raising the GDP growth more than with a simple trend model. In this case, GDP would have been $21,699, and the graph in this case looks like, 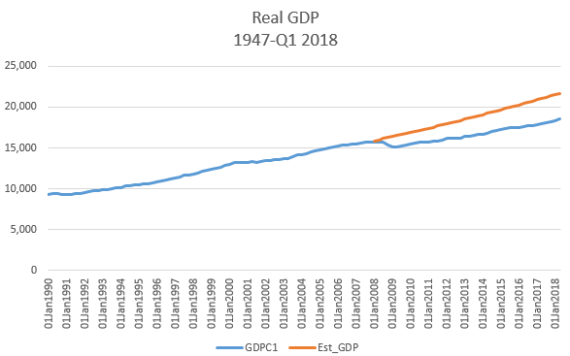 In either case what we see is a growing divergence between recorded GDP and the trend stationary GDP estimates. That is, the argument that the financial crisis/Great Recession is not a unit root event is not looking good. There is no indication of a return to original trend. Additionally, using SAS and the proc ARIMA procedure I ran an augmented Dickey-Fuller test and the results indicated rejecting the null hypothesis of no unit root–i.e. that the correct model is one with a unit root. It seems reasonable to conclude that those who suggested the possibility of a unit root were indeed correct and that their detractors were wrong. I guess “evil” wins.