James Garner, the wry and handsome leading man who slid seamlessly between television and the movies but was best known as the amiable gambler Bret Maverick in the 1950s western “Maverick” and the cranky sleuth Jim Rockford in the 1970s series “The Rockford Files,” was found dead of natural causes in his California home on Saturday night, Officer Alonzo Iniquez of the Los Angeles Police Department told The Associated Press on Sunday. He was 86.

Mr. Garner, who smoked for most of his life, even after open-heart surgery in 1988, had suffered a stroke in 2008.

Mr. Garner was a genuine star but as an actor something of a paradox: a lantern-jawed, brawny athlete whose physical appeal was both enhanced and undercut by a disarming wit. He appeared in more than 50 films, many of them dramas, but as he established in one of his notable early performances, as a battle-shy naval officer in “The Americanization of Emily” (1964) — and had shown before that in “Maverick” — he was most at home as an iconoclast, a flawed or unlikely hero.

An understated comic actor, he was especially adept at conveying life’s tiny bedevilments. One of his most memorable roles was as a perpetually flummoxed pitchman for Polaroid cameras in the late 1970s and early 1980s, in droll commercials in which he played a vexed husband and Mariette Hartley played his needling wife. They were so persuasive that Ms. Hartley had a shirt printed with the declaration “I am NOT Mrs. James Garner.”

His one Academy Award nomination was for the 1985 romantic comedy “Murphy’s Romance,” in which he played a small-town druggist who woos the new-in-town divorced mom (Sally Field) with a mixture of self-reliance, grouchy charm and lack of sympathy for fools.

Even Rockford, a semi-tough ex-con (he had served five years on a bum rap for armed robbery) who lived in a beat-up trailer in a Malibu beach parking lot, drove a Pontiac Firebird and could handle himself in a fight (though he probably took more punches than he gave), was exasperated most of the time by one thing or another: his money problems, the penchant of his father (Noah Beery Jr.) for getting into trouble or getting in the way, the hustles of his con-artist pal Angel (Stuart Margolin), his dicey relationship with the local police.

“Maverick” had been in part a send-up of the conventional western drama, and “The Rockford Files” similarly made fun of the standard television detective, the man’s man who upholds law and order and has everything under control. A sucker for a pretty girl with a distinctly ’70s fashion sense — he favored loud houndstooth jackets — Rockford was perpetually wandering into threatening situations in which he ended up pursued by criminal goons or corrupt cops. He tried, mostly successfully, to steer clear of using guns; instead, a bit of a con artist himself, he relied on impersonations and other ruses — and high-speed driving skills. Every episode of the show, which ran from 1974-80 and more often than not involved at least one car chase and Rockford’s getting beat up a time or two, began with a distinctive theme song featuring a synthesizer and a blues harmonica and a message coming in on a newfangled gadget — Rockford’s telephone answering machine — that underscored his unheroic existence: “Jim, this is Norma at the market. It bounced. Do you want us to tear it up, send it back or put it with the others?”

Mr. Garner came to acting late, and by accident. On his own after the age of 14 and a bit of a drifter, he had been working an endless series of jobs: telephone installer, oilfield roughneck, chauffeur, dishwasher, janitor, lifeguard, grocery clerk, salesman and, fatefully, gas station attendant. While pumping gas in Los Angeles, he met a young man named Paul Gregory, who was working nearby as a soda jerk but wanted to be an agent.

Years later, after Mr. Garner had served in the Army during the Korean War — he was wounded in action twice, earning two Purple Hearts — he was working as a carpet layer in Los Angeles for a business run by his father. One afternoon he was driving on La Cienega Boulevard and saw a sign: Paul Gregory & Associates. Just then a car pulled out of a space in front of the building, and Mr. Garner, on a whim, pulled in. He was 25.

Mr. Gregory, by then an agent and a theatrical producer, hired him for a nonspeaking part in his production of Herman Wouk’s “Caine Mutiny Court-Martial,” which starred Henry Fonda, John Hodiak and Lloyd Nolan. It opened in Santa Barbara and toured the country before going to Broadway, where it opened in January 1954 and ran for 415 performances. Mr. Garner said he learned to act from running lines with the stars and watching them perform, especially Mr. Fonda, another good-looking actor with a sly streak.

“I swiped practically all my acting style from him,” he once said.

Mr. Garner claimed to have stage fright and no desire to act in the theater. He later played Lt. Maryk (the Hodiak role) in a touring company of the play that starred Charles Laughton, but afterward would almost never appear onstage again. Still, it was the serendipitous stop on La Cienega that changed his life.

“The only reason I’m an actor is that a lady pulled out of a parking space in front of a producer’s office,” he wrote in “The Garner Files.”

James Scott Bumgarner was born in Norman, Okla., on April 7, 1928. His paternal grandfather had participated in the Oklahoma land rush of 1889 and was later shot to death by the son of a widow with whom he’d been having an affair. His maternal grandfather was a full-blooded Cherokee. (Mr. Garner would later name his production company Cherokee Productions.) His first home was the back of a small store that his father, Weldon, known as Bill, ran in the nearby hamlet of Denver. His mother, Mildred, died when he was 4. When he was 7, the store burned down and his father left James and his two older brothers to be raised by relatives; when his father remarried, the family reunited, but James’s stepmother was abusive, he said in his memoir, and after a violent episode at home, he left.

He worked in Oklahoma, Texas and Los Angeles, where his father finally resettled. He went briefly to Hollywood High School but returned to Norman, where he played football and basketball, to finish. In 1950, when the Korean War broke out, he was drafted.

Mr. Garner’s first Hollywood break came when he met Richard L. Bare, a director of the television western “Cheyenne,” who cast him in a small part. That and other bit roles led to a contract with Warner Brothers, which featured him in several movies — including “Sayonara” (1957), starring Marlon Brando and based on James Michener’s Korean War novel about interracial romance — and sliced the first syllable from his last name.

His first lead role was in “Darby’s Rangers” (1958) as the World War II hero William Darby, a part he was given after Charlton Heston walked off the set in a dispute with the studio over money. At about the same time he was cast as the womanizing gambler Bret Maverick, the role that made him a star.

Alone among westerns of the 1950s, “Maverick,” which made its debut in 1957, was about an antihero. He didn’t much care for horses or guns, and he was motivated by something much less grand than law and order: money. But you rooted for him because he was on the right side of moral issues, he had a natural affinity for the little guy being pushed by the bully, and he was more fun than anyone else.

“If you look at Maverick and Rockford, they’re pretty much the same guy,” Mr. Garner wrote. “One is a gambler and the other a detective, but their attitudes are identical.”

Garner had had a stroke several years ago from which he apparently never recovered, so his passing does not come as a surprise. Nonetheless, the passing of yet another television icon is a sad thing. 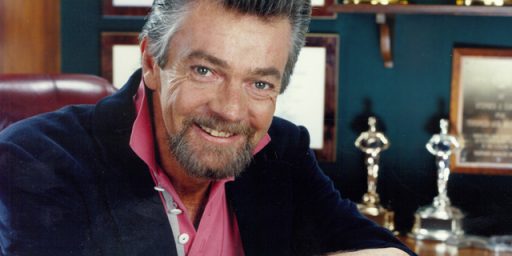