On the eve of transition to solo operations, Afghan forces can't do basic logistical functions. 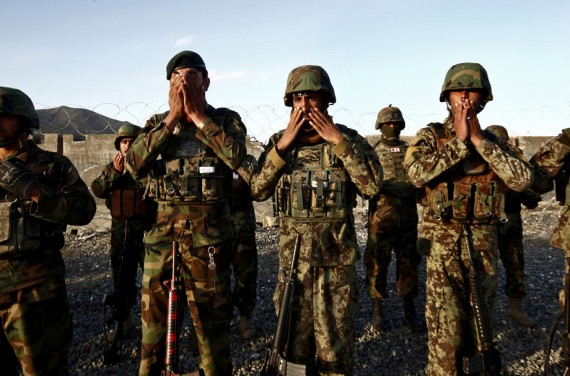 On the eve of transition to solo operations, Afghan forces can’t do basic logistical functions.

Congress has appropriated $51 billion to build and sustain the Afghan army, but Lt. Col. Kohadamani Hamidullah can’t get his Humvees repaired.

“See all those Humvees?” he said inside his military base here in east-central Afghanistan, pointing to a ragged line of dusty Humvees. “Broken. Broken. Broken…. All broken.”

The United States has supplied 46 Humvees for Hamidullah’s battalion here in the rugged, snowcapped peaks of Wardak province in the last couple of years. Only 16 are still running.

A shortage of spare parts, plus a lack of trained mechanics, is among Hamidullah’s headaches as he struggles to wean his troops from dependence on the U.S. military. American combat forces are scheduled to leave next year, and the White House is reportedly considering pulling the rest as well. Last month marked the formal transfer of security responsibilities from international troops to Afghan forces. As a consequence, the colonel and his U.S. counterpart are hustling to forge a self-sufficient national fighting force.

Hamidullah, 38, already plans 90% of his unit’s operations against the Taliban in the villages and farm fields of this strategic province on Kabul’s southwestern shoulder. But U.S. Army Lt. Col. Curby Scarborough, a tall, rangy artillery officer, continues to huddle with Hamidullah almost daily. He and other U.S. advisors mentor Hamidullah’s several hundred troops in a province where Taliban fighters dominate the countryside outside Maidan Shahr, the provincial capital.

The U.S. has sent attack planes and helicopters to assist Afghan forces and has helped with medical evacuation. That help is all but ending with the transfer to full Afghan security control.

Scarborough is trying, inch by inch, to end Hamidullah’s dependence — to become what he calls a “shadow advisor.” But right now, he says, the Afghan army has holes that desperately need filling.

“They struggle with logistics and enablers,” Scarborough said, referring to evacuating and treating the wounded, obtaining supplies and ammunition, and maintaining and repairing equipment. “So they are at times more dependent on us than we’d like.”

Even so, he said, Hamidullah has brought professionalism to his unit. “He controls his guys,” Scarborough said. “They used to just spray and pray. Now they have discipline.”

Hamidullah, a dynamic man with a stout build and a fierce black beard, is considered one of the Afghan army’s elite commanders. A U.S. officer nicknamed him “Big Show,” after an American professional wrestler.

Hamidullah says his forces could fight the Taliban on their own if only the U.S. would provide him with enough tools.

He paused to swallow, then added that the quality of Afghan military uniforms remains poor. So too the army’s logistical system, beset by incompetence and theft.

“If we don’t get all these things fixed by 2014, then we have big problems,” he said. “Right now, it’s like the tea without the sugar.”

Also: the tea. And the cup.

It’s great that they’ve finally learned fire discipline. But, even aside from the problem of enemy infiltration, this is a hollow force.  They’re trained in basic soldiering tasks but lack institutionalized leadership. American soldiers leave their basic and occupational training and go to units led by seasoned non-commissioned officers who can continue their professional development. The Afghans lack that institutionalization.