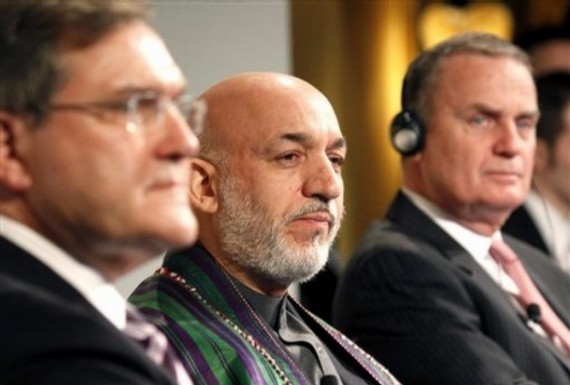 An anonymous attendee of Central Command’s Af-Pak conference penned a post Andrew Exum’s Abu Muqawama arguing that the experts who have advised on our Afghanistan strategy over the years aren’t worthy of the name.

The conference was structured in a way that prevented it from generating the analysis that ISAF so badly needs. The structure was built entirely on the participation of experts. Let’s be clear about something here: when it comes to social and political issues, experts don’t exist. A doctor is an expert if he can correctly diagnose a disease or successfully perform a surgery. The think-tankers, pundits, and (very few) academics who presented at this conference do not have comparable accomplishments to prove their expertise. They have publications and organizations. Every expert at this conference–there was nearly one of them for every two participants, and the participation of every single one was selected by conference planners, not volunteered independently–was considered an expert because he or she had written about related topics, lived in related places, or participated in related activities. That isn’t expertise. It’s just experience. And it’s a really huge leap to assume that an individual’s personal or even professional experience can provide generalizeable insight into an entire region or social situation.

The experts who argued so ardently for this or that position at this conference are in most cases the exact same experts who have been giving advice to our military planners and political leaders for the entire duration of this conflict. If these people’s ideas, in and of themselves, were worth anything, then ISAF would have something to show for it by now. The experts have failed the military, and the fact that they continue to attend these events and dispense their warrant-less assumptions and evidence-less arguments shows a shocking lack of awareness of their own uselessness, or else a shocking disregard for the military that is asking them for help. This conference, like so many other outreach efforts, gave self-proclaimed experts a privileged position in the debate about how ISAF should carry out its mission. The debate, and ISAF itself, is no better off for it.

I respond to this in some detail at New Atlanticist, in a posting titled “Defending the Afghanistan Experts,” reluctantly substituting the phrase complete nonsense for my initial complete horseshit.