Afghanistan, Then And Now

Afghanistan was a much different place half a century ago. 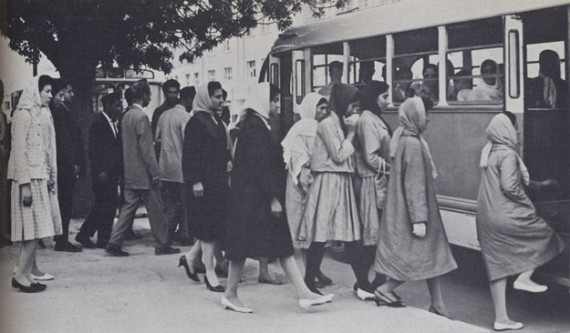 Reason’s Tim Cavanaugh passes along the above photo and others depicting Afghanistan in the 1950 and 60s. The contrast between then and now is apparent:

“Given the images people see on TV, many conclude Afghanistan never made it out of the Middle Ages,” writes Mohammad Qayoumi at Retronaut. “But that is not the Afghanistan I remember. I grew up in Kabul in the 1950s and ’60s. Stirred by the fact that news portrayals of the country’s history didn’t mesh with my own memories, I wanted to discover the truth.”

Qayoumi’s gallery of what the Graveyard of Empires looked like before it was brought into contemporary civilization by the Hippie Trail, Soviet modernization, Taliban discipline and American nation-building is at once endearing, heartbreaking and disturbing. Because it turns out pre-modern Afghanistan looked pretty, well, modern.

What’s disturbing is that actual civilzational retrograde is so rare in the modern world that you can almost believe it never happens. Even a few years after World War II, most Western Europeans had a higher standard of living than they had had before the war. Yet here you have a country that was apparently not in the dark ages, but got there as fast as it could.

What’s also striking as you look at the pictures is the extent to which Afghan women of this era seem so much different from what we see today. There are no burqa’s, no hajib’s, just the simple headscarf that you see many Muslim-American women wearing today. Men wore business suits and other basically western clothes. It looked, in other words, like many other third world cities of the era that saw the path to prosperity in copying the ways of the West. At some point, obviously, that changed, and the twin influences of Communism and Islam obviously under cut the modernization that was apparently underway in the country. Hamid Karzai was born in 1957 and grew up in this world, but one wonders if he actually remembers much about it. Things very well have been different in the tribal and rural areas, of course, but a nation like this is often defined by its capital city and the Kabul of half a century ago seems so different from the images we see today that it’s hard to believe they are the same city.

Obviously, the nearly endless cycle of war that started in the late 1970s is a key part of what happened to this nation, but it strikes me that there might be something more that led to the insanity that is modern Afghanistan. Given the choice, I’d have to bet that most Afghans would prefer the Kabul of the 1960s to what they live in today. How it got that way in such a short period of time is difficult to think about, though, because it makes you wonder if it could happen elsewhere in the world.

At this point, Afghanistan couldn’t possibly be further away from where it was when these pictures were taken.