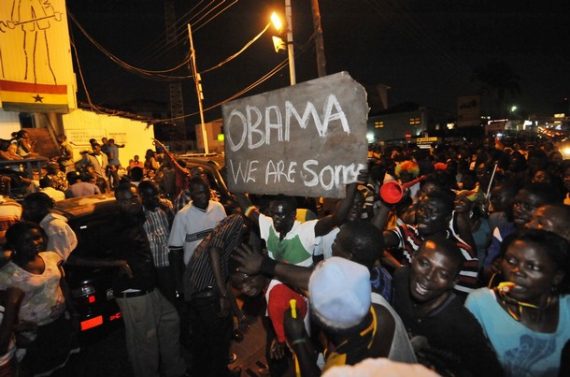 Ghanian national football team supporters, one of them carrying a placard ‘Obama we are sorry’, celebrate in Accra after Ghana beat the US 2-1 after extra time in Rustenberg on June 26, 2010 during the World Cup football tournament in South Africa. The Black Stars are bidding to become the first African side to reach the semi-finals of the tournament. Asamoah Gyan was Ghana’s match-winner, smashing home the winning goal in the third minute of extra time after shrugging off a challenge from Rennes club-mate Carlos Bocanegra on the edge of the American penalty area. AFP PHOTO/ SIA KAMBOU (Photo credit should read SIA KAMBOU/AFP/Getty Images)