The Air Force is apparently about to become a branch of the United States military:

Beginning next year, Air Force officials will implement a new fitness test completely different than what airmen today are familiar with.

The more functional test will include a 1.5-mile timed run, a muscular-fitness test of push-ups and crunches and a body composition test. It is designed to measure the general health of airmen, said Maj. Lisa Schmidt, chief of health promotions operations at the Air Force surgeon general’s office.

“The goal is to have a healthy, fit force that can deploy at any time,” Schmidt said. “Our goal is to prevent the onset of diseases such as heart attacks, stroke, high-blood pressure and high cholesterol. Basically, it is about keeping members healthy so they will perform optimally, in-garrison and deployed. Healthy members are more heat-, stress- and fatigue-tolerant, and less prone to illness and injury.”

In the Army and Marine Corps, the goal is to have soldiers fit for performance. The Air Force is apparently hoping just to have people not keel over before hitting 40. And this is an increased standard!

While the charts are not available yet, airmen who are not already involved in some sort of exercise program should begin now, Schmidt said.

“If you are not doing anything now and have concerns, see your doctor first,” she said. “Begin slowly with an aerobic-exercise program such as running, jogging, swimming or biking, working up to at least 30 minutes on most days of the week. Muscular fitness and flexibility also need to be part of a balanced fitness program. If you have questions about starting a fitness program, you can contact your local (health and wellness center). They can help develop a program that’s right for you.”

And, since this is an Air Force publication, one would have thought they’d have come up with a better photograph. . . 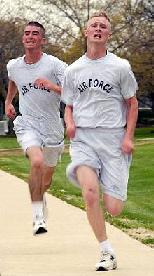