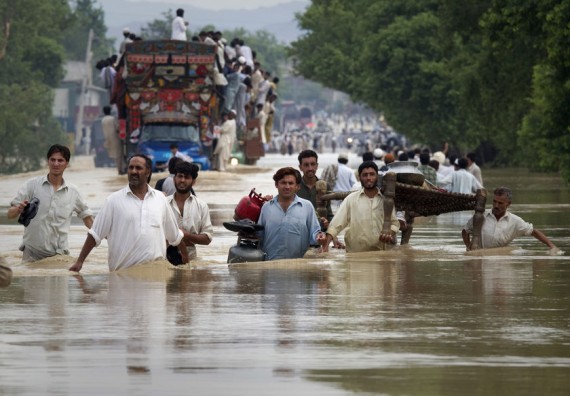 While the floods in Pakistan have remained off the front page in the United States, they’re still having an impact on the daily lives of millions of people and now al Qaeda seems to be trying to exploit the crisis for their own purposes:

DUBAI (Reuters) – Al Qaeda’s number two Ayman al-Zawahri released an audio recording Wednesday accusing the Pakistani government of responding too slowly to severe flooding in the country and calling on Pakistanis to revolt.

Zawahri, believed to be hiding in mountains along the Afghan-Pakistani border, spoke in a 44-minute recording which appeared to mark the anniversary of the September 11, 2001 attacks in the United States.

“The primary concern of the ruling class in the government and army of Pakistan is filling their domestic and foreign bank accounts with dollars, and as far as they are concerned, Pakistan and its people can go to hell,” he said.

More than 1,700 people have been killed and millions displaced in the flooding, which began six weeks and has caused an estimated $43 billion in damage.

Pakistan’s military has taken the lead in providing relief, but the civilian government has been criticized for its sluggish response.

Entitled “”A Victorious Ummah, A Broken Crusade: Nine Years After the Start of the Crusader Campaign,” the recording was posted on an Islamist websites often used by al Qaeda.

Zawahri called on Pakistanis and Turkish Muslims to rise up against their government because of their involvement in Afghanistan.