Former Senator Alan Simpson is fighting back against the critics on the left and the right who are shooting down the Deficit Commission's plan before it's even been released. 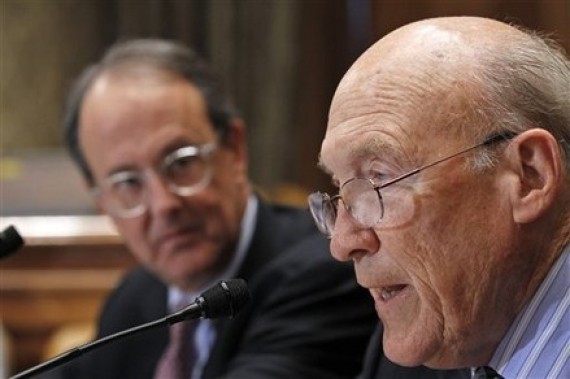 When he was a Senator from Wyoming, Alan Simpson was hardly a guy to hold back his thoughts, and his recent comments about critics of the Deficit Commission that he co-chairs shows that he hasn’t lost the ability to speak his mind:

CHEYENNE–During Al Simpson’s nearly 50 years in government, he hasn’t been afraid to take on critics and naysayers of his work in the U.S. Senate or on a variety of high-profile commissions and committees.

But as the co-chair of President Obama’s debt commission, the Wyoming Republican said he’s been taking an unprecedented amount of flak for the commission’s draft proposals to help erase the nation’s $13.8 trillion debt.

“I’ve never had any nastier mail or [been in a] more difficult position in my life,” said the 79-year-old Simpson. “Just vicious. People I’ve known, relatives [saying], “‘You son of a bitch. How could you do this?'”

Not surprisingly, many of the debt commission’s draft proposals to cut the debt by nearly $4 trillion by 2020 — from raising the retirement age to 69 by 2075 to bringing in $1 trillion more in tax revenue — have won strong opposition from liberals and conservatives alike.

But Simpson said that while every interest group that testified before his committee agreed that the mounting federal debt is a national tragedy, they would then talk about why government funding to their area of interest shouldn’t be touched.

Much like the Commission itself, Simpson has been attacked by both the left and the right for some of the outspoken comments he’s made lately, but he’s absolutely right here. As I noted in my first piece about the Bowles-Simpson proposal, the nature of our political culture makes it unlikely that anyone will tackle the Deficit Commission’s proposals seriously, and Simpson recognizes the problem as well:

All this hubbub isn’t a surprise to Simpson, given how politically polarized the country is these days.

“You don’t want to listen to the right and the left — the extremes,” he said. “You don’t want to listen to Keith Olbermann and Rush Babe [Limbaugh] and Rachel Minnow [sic] or whatever that is, and Glenn Beck. They’re entertainers. They couldn’t govern their way out of a paper sack — from the right or the left. But they get paid a lot of money from you and advertisers — thirty, fifty million a year — to work you over and get you juiced up with emotion, fear, guilt, and racism. Emotion, fear, guilt, and racism.

Unfortunately we now live in a world where many people seem to believe quite the opposite, and where the same event can be interpreted quite differently depending on where on the ideological spectrum you happen to fall. When that’s the case, it’s hard to see where the common ground for agreement can even be found.

The Deficit Commission is a good idea, and hopefully its final report will put forward a plan that can serve as a starting point for a rational discussion of what Americans really want from their government, and how they’re going to pay for it. It’s going to be hard to do , though, in a political climate where there will be pushback from the blowhards of the left and the right, which is why it’s good to see someone like Simpson already taking pre-emptive strikes against the demagouges because, as James Joyner noted back in April, Simpson’s credentials in this area are indisputable:

Did Simpson really have “best damn record on no taxes of any son-of-a-bitch in the Senate”?  Well, I’m sure there were sons-of-bitches who voted No more consistently.  But that only gives them a better record than Simpson if they also voted to drastically cut spending.  And maybe not even then, given that such votes would have been token.  Simpson, on the other hand, worked to achieve compromises and then voted for the deal that both best achieved his goals and could get through Congress.

Simpson was a small-C conservative of the type frequently found out West.  He believed in low taxes, yes, but also fiscal responsibility.  And, absent the appetite to control spending — which Republicans make difficult by deifying the Defense budget — that sometimes means increasing taxes.   But, Grover Norquist’s desires to the contrary, constantly cutting taxes while piling up debt isn’t conservative at all.

Go get them Alan, at least some of us will have your back on this one.