The Alaska Supreme Court has ruled that the state's sex offender registry violates due process protections in the state and Federal Constitutions.

In an opinion issued last week, the Alaska Supreme Court ruled that the state’s sex offender registry violated due process requirements under the state and Federal Constitutions on the ground that it did not allow people who could establish they are not dangerous to be kept off of or have their names removed from, the registry:

Alaska’s Supreme Court on Friday ruled that the state’s sex offender registry violated the due process rights of those convicted of sex crimes in other states, deeming it “too broad and arbitrary when it includes offenders who are not dangerous.”

The court ruled 3-2 in favor of a man, referred to as John Doe, who moved to Alaska after being convicted of a sex crime in another state, local NBC affiliate KTUU reported.

“Doe contends that these rights are fundamental and that their infringement can only be justified if the State has a compelling interest and uses the least restrictive means available to vindicate that interest,” the court wrote.

Representatives for Alaska argued that it was in the state’s best interest for public safety to monitor out-of-state offenders, but the court responded by quoting the due process clause in the Alaska Constitution, KTUU reported.

“We have concluded that ASORA furthers a compelling state interest in protecting the public from sex offenders who ‘pose a high risk of reoffending after release from custody,'” the court wrote. “But ASORA is both too broad and arbitrary when it includes offenders who are not dangerous. Since they pose no special risk to the public, their protected liberty interests plainly outweigh any public safety interests that might be furthered by requiring them to register.”

The Alaska Supreme Court has ruled 3-2 that part of the state’s Sexual Offender Registration Act violates due process rules, calling it “both too broad and arbitrary” after hearing a case brought by a man convicted of a sex crime in Virginia, who later moved to Alaska. The man was referred to in the lawsuit as John Doe.

The man’s argument against registering as a sex offender was twofold – that Alaska, for a number of reasons, couldn’t impose penalties on an offender due to an offense from out of state, and that the Alaska Sexual Offender Registration Act violates the due process clause of the Alaska Constitution.

The Alaska Supreme Court upheld the court’s decision on the first part of the law, requiring sex offenders with convictions from out-of-state to register in Alaska, but found that offenders must be offered an opportunity to make the case that they are no longer a danger to the community.

“In particular, he contends that ASORA infringes on a number of constitutionally protected rights, including: the right to integrate into society, the right to privacy, the right to be let alone, and the right to pursue employment,” the Alaska court wrote. “Doe contends that these rights are fundamental and that their infringement can only be justified if the State has a compelling interest and uses the least restrictive means available to vindicate that interest. He argues that there is no compelling interest justifying registration if an offender does not present a danger to the public, and that ASORA is deficient because it ‘provides no mechanism whereby a registrant can be relieved of the requirement if they prove they do not present a threat to the public.’ “

While the state of Alaska argued that the state’s interests of public safety are compelling and that there were no less restrictive means available to protect them, the court quoted the due process clause of the Alaska Constitution, saying it requires that adequate and fair procedures be employed when state action threatens protected life, liberty, or property interests.

The court agreed with the offender’s argument. “We have concluded that ASORA furthers a compelling state interest in protecting the public from sex offenders who ‘pose a high risk of reoffending after release from custody.’ But ASORA is both too broad and arbitrary when it includes offenders who are not dangerous. Since they pose no special risk to the public, their protected liberty interests plainly outweigh any public safety interests that might be furthered by requiring them to register,” the court wrote.

Instead of invalidating the rule, the Supreme Court Justices elected instead to allow the offender to file action in court in which he will try to prove that he’s no longer a risk to the public, and should not be required to continually register. These hearings are neither specifically required by the law, nor prohibited.

Sex offender registries have been in vogue for roughly the past twenty to twenty-five Generally speaking, they were inspired by cases involving children who were abducted, sexually abused, and killed. The most notable of those cases were those of Jacob Wetterling, an 11-year-old Minnesota boy who was abducted in 1994, Megan Kanka, a 7-year-old New Jersey girl who was abducted in 1994, and perhaps most famously Adam Walsh, who was abducted from a Florida department store in 1981. Because of his case, Adam’s father John became involved in cases involving missing children and eventually became the host of the long-running Fox Broadcasting show America’s Most Wanted. In each of these cases, it was ultimately learned that the perpetrator was someone who had a previous history of violent sexual attacks on children and, in some cases, adults but local authorities had no knowledge about this. As a result, a series of laws named after the children whose cases prompted them were passed at the Federal and state levels, This includes the Jacob Wetterling Act of 1994, Megan’s Law, which has also been adopted in many foreign countries, and the Adam Walsh Child Safety and Protection Act. In their own ways, each of these laws and others have helped to share sex offender registries as we know them today.

Generally speaking, these laws, which now exist in every state and are usually publicly available via the Internet, require that every person convicted of a sex-related offense, whether against a child or an adult be placed on the registry. The laws also generally require those listed to ensure that their residential address is up-to-date and, in some cases, that local law enforcement is advised when they move to a new community. Many of these laws also place restrictions on where people on the list can live, such as forbidding them from living within a certain distance from schools and other places where children gather. Finally, the laws do sometimes distinguish between cases where someone is placed on the registry for a defined period and others where an offender essentially will remain on the list for life.

As a general concept, the idea of a sex offender registry is not necessarily a bad or objectionable one. This is especially true of persons with a record of violent sexual assaults. In such situations, one can make the argument that both parents and local authorities have some right to know if there is a potential danger in the neighborhood. The problem that has developed with these registries over the years, though, is that slowly but surely the number of offenses that qualify for placement on the registry has gone well beyond the original intent of identifying those with a history of violent offenses to included people convicted of non-violent offenses such as indecent exposure and possession (but not production or distribution) of child pornography. Additionally, there have been cases where children who have been convicted of the non-violent crimes involved so-called ‘sexting’ have faced the possibility of having their lives turned upside down. I’ve written about some of those cases here at OTB (see here, here, here, and here for examples.)

The Alaska case involves a man who had been convicted of an apparently non-violent sex-related offense in Virginia who later moved to Alaska. The man, identified as John Doe for purposes of the case, argued that Alaska’s law regarding the sex offender registry violated due process on its face. The nature of Doe’s offense in Virginia is not clear from the reports but it appears that it was non-violent. That fact doesn’t really play into the state Supreme Court’s ruling. Instead it finds that the registry as a whole violates due process when it is applied to persons who have not demonstrated that they are a danger to the community. Because they do not pose a danger to the public, the Court ruled, application of the registry in their case was not justified because the interest of the state was outweighed by the liberty and private rights of the Defendants. To my knowledge, this is the first time such a ruling has been issued by any court.

The implications of this ruling going forward could be broad. While it doesn’t apply anywhere outside of Alaska, the arguments that Doe advanced here could easily be made in most other states that have registry laws that fail to treat violent and non-violent offenders differently. It will be interesting to see if this is the beginning of a trend that rationalizes these registry laws so that they return to their original intent of keeping track of violent sexual offenders who are likely to offend again.

Doe v. Alaska by on Scribd

FILED UNDER: Law and the Courts, U.S. Constitution 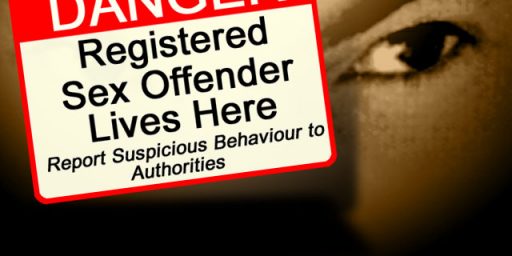