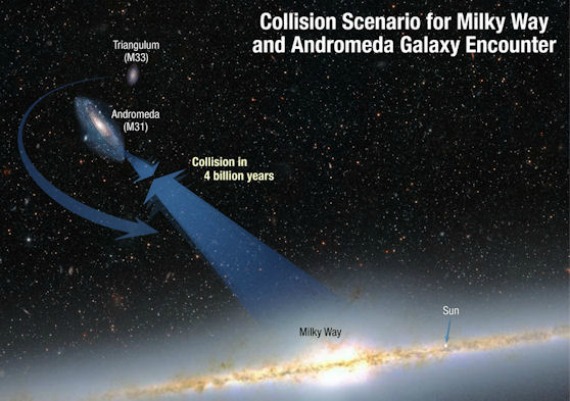 Mark your calenders, because scientists now know the date of intergalactic doom:

May 31, 2012:  NASA astronomers say they can now predict with certainty the next major cosmic event to affect our galaxy, sun, and solar system: the titanic collision of our Milky Way galaxy with the neighboring Andromeda galaxy.

The Milky Way is destined to get a major makeover during the encounter, which is predicted to happen four billion years from now. It is likely the sun will be flung into a new region of our galaxy, but our Earth and solar system are in no danger of being destroyed.

“After nearly a century of speculation about the future destiny of Andromeda and our Milky Way, we at last have a clear picture of how events will unfold over the coming billions of years,” says Sangmo Tony Sohn of the Space Telescope Science Institute (STScI) in Baltimore.

“Our findings are statistically consistent with a head-on collision between the Andromeda galaxy and our Milky Way galaxy,” adds Roeland van der Marel of the STScI.

Of course, this isn’t really a forecast of doom:

Although the galaxies will plow into each other, stars inside each galaxy are so far apart that they will not collide with other stars during the encounter. However, the stars will be thrown into different orbits around the new galactic center. Simulations show that our solar system will probably be tossed much farther from the galactic core than it is today.

To make matters more complicated, M31’s small companion, the Triangulum galaxy, M33, will join in the collision and perhaps later merge with the M31/Milky Way pair. There is a small chance that M33 will hit the Milky Way first.

Doom or not, we’re going to have a lot of house guests in a few billion years. Someone better start stocking up on nachos and beer.