A controversial name is disappearing from one small stretch of road. 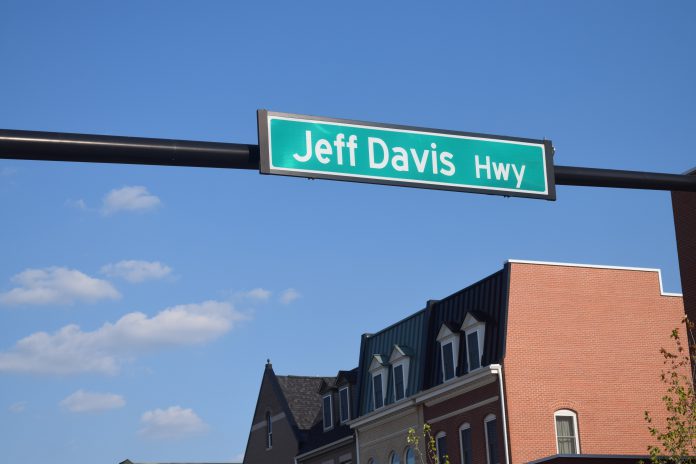 The name of the road, also known as U.S. Route 1, has long irritated many in the liberal town but it took the Charleston church shooting in 2015 for the council to start the process. It will cost the city $27,000 to change the signs, and the portion of the road that splits into Patrick and Henry streets will not be renamed. A community task force unanimously recommended the name Richmond Highway, from among hundreds of suggestions, because that is what the road is called in adjacent Fairfax County.

Arlington County’s portion of the road remains named after the Confederate president. The county does not have the legal authority to change the name on its own but if the General Assembly were to clear a name change, county officials have indicated they would go along with whatever Alexandria chose.

While I have mixed feelings about the current bout of stripping the names of Confederate leaders off various monuments in the South, this particular move strikes me as unobjectionable. I doubt many have strong attachment to the name, since most of us just call it “Route 1,” and those who care most about the name are likely those who find it offensive.

Route 1 (US 1) was the first interstate highway in the country, predating the Interstate Highway System by decades. As its Wikipedia entry notes, “it runs 2,369 miles (3,813 km), from Fort Kent, Maine, at the Canada-US border, south to Key West, Florida, making it the longest north-south road in the United States” and “connects most of the major cities of the East Coast—including Miami, Jacksonville, Richmond, Washington, D.C., Baltimore, Philadelphia, New York City and Boston.” Of course, most people wanting to drive between those cities would take I-95, instead, since it has higher speed limits and isn’t dotted with stoplights every three feet.

I happen to live maybe an eighth of a mile off of it, although it’s already “Richmond Highway” here. While I have an Alexandria mailing address, I’m in the Fairfax County portion of Alexandria rather than the City of Alexandria. (Virginia, unlike any of the several other states in which I’ve lived, has counties and independent cities; the cities are not subsections of the counties.) While traffic usually makes it the least efficient route to DC, roughly 13 miles north, it’s the shortest path. And, as the WaPo report notes, the name changes repeatedly along the way: Richmond Highway, Jefferson Davis Highway, Patrick Street, Jefferson Davis Highway. It’ll have one fewer name change come the new year. Going southbound, I can get from the house all the way to the main gate at Quantico via the road (although, again, I-95 tends to be the preferable route). It becomes Jefferson Davis Highway again along the way.

The incredibly detailed Wiki on the highway’s path through Virginia does a great job of discussing the roads with which it intersects but not the various name changes. The main Wikipedia entry states, “Within Virginia, US 1 is called Jefferson Davis Highway by state law, although most of the Fairfax County portion, except Lorton, is better known as the Richmond Highway.” The reason it’s “better known” is because that’s what the green route markers say they’re called.

It turns out that the “Jefferson Davis Highway” was actually part of a larger project that failed to come to fruition. From another Wikipedia entry:

The Jefferson Davis Highway, also known as the Jefferson Davis Memorial Highway, was a planned transcontinental highway in the United States in the 1910s and 1920s that began in Arlington, Virginia, and extended south and west to San Diego, California; it was named for Jefferson Davis, President of the Confederate States, United States senator, and Secretary of War. Because of unintended conflict between the National Auto Trail movement and the federal government, it is unclear whether it ever really existed in the complete form that its United Daughters of the Confederacy (UDC) founders originally intended.

In the first quarter of the 20th century, as the automobile gained in popularity, a system of roads began to develop informally through the actions of private interests. These were known as auto trails. They existed without the support or coordination of the federal government, although in some states, the state governments participated in their planning and development. The first of these National Auto Trails was the Lincoln Highway, which was first announced as a project in 1912.

By the mid-1920s, the informal system of national auto trails had grown cumbersome, and the federal government imposed a numbering system on the nation’s highways, using even numbers for east-west routes and odd numbers for north-south routes. Rather than using a single number for each auto trail, sections of each trail were given different numerical designations. However, the UDC petitioned the U.S. Bureau of Public Roads to designate the Jefferson Davis as a national highway with a single number. The Bureau’s reply casts doubt on whether or not the JDMH ever really existed as a transcontinental highway:

This problem may well have been the fault of the UDC themselves. In addition to the planned transcontinental route, they also designated an auxiliary route running from Kentucky to Mississippi, as well as another that ran through Georgia. These ancillary routes were intended to commemorate important venues in Davis’ life, but they also contributed to the confusion of the federal government in trying to locate exactly where the Jefferson Davis highway traveled. What is known is that when numbered highways came into existence, the Jefferson Davis National Highway was split among US 1, US 15, US 29, US 61, US 80, US 90, US 99, US 190 and others. Today, many of these numbered routes themselves are no longer extant, having been supplanted by the Interstate Highway System.

Significant portions of the route remain named as “Jefferson Davis Highway,” including in such far-flung places as Arizona and California.

City councilors voted unanimously Saturday to change the name of Jefferson Davis High- way within city limits, and will ask permission from the Virginia General Assembly to move the so-called “Appomattox” statue out of South Washington Street.

Renaming Jefferson Davis Highway — a stretch of U.S. Route 1 that begins in Potomac Yard and goes north into Arlington County — was a recommendation of an ad hoc resident group tasked with examining changes to the city’s Confederate memorials and references.

But council’s decision to request permission to move the statue, located in the intersection of Prince and South Washington streets, goes beyond the group’s recommendations, which advocated leaving the statue in place. “Appomattox” has stood at that site since 1889, and under state law requires approval from Richmond because it is a war memorial.

It’s interesting how much control Richmond has over seemingly local issues.

The debate that went into the decision was thoughtful:

The need for General Assembly approval for any change weighed heavily on councilors. The statue is owned by the United Daughters of the Confederacy, so a move also would require that group’s assent, and the suggested new location by councilors was about 20 feet away at The Lyceum, on the southwest corner of the intersection.

But there was reluctance to try to move the statue, in part because of the difficult political environment for such a proposal in Richmond. Earlier this year, Gov. Terry McAuliffe (D) vetoed a bill that would have prevented local governments from removing Confederate monuments.

City councilors also grappled with how best to use the statue as an educational opportunity.

“I think it is a terrific teaching point that we are not all equal yet,” said City Councilor John Chapman. “We have not sewn up our wounds, whether it’s civil conflict or racial conflict. We’re not there yet.”

“My goal is how do we tell a broader tale of our history and not just one part of it?” said Vice Mayor Justin Wilson. “I think we have the opportunity here and elsewhere in the city, so for me it’s not a question necessarily about whether the statue goes or does not go. It’s a question of how do we broaden that story and how do we broaden how we tell that history?”

That’s really the question. We shouldn’t whitewash controversial pieces of our history. But the bevy of Confederate statues in Virginia are essentially one-sided without context. 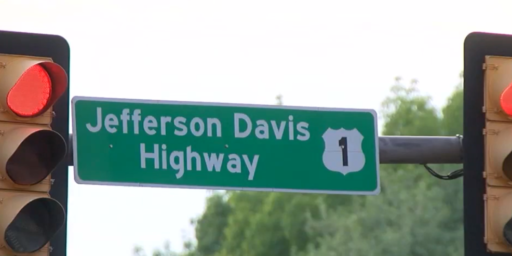