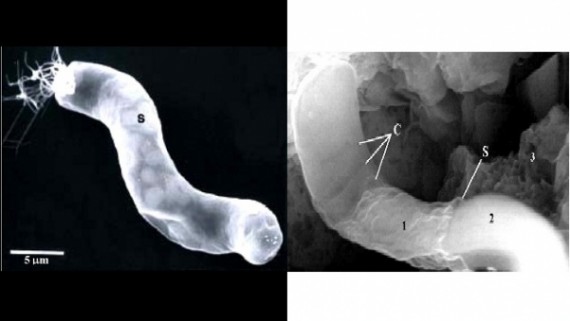 We are not alone in the universe — and alien life forms may have a lot more in common with life on Earth than we had previously thought.

That’s the stunning conclusion one NASA scientist has come to, releasing his groundbreaking revelations in a new study in the March edition of the Journal of Cosmology.

Dr. Richard B. Hoover, an astrobiologist with NASA’s Marshall Space Flight Center, has traveled to remote areas in Antarctica, Siberia, and Alaska, amongst others, for over ten years now, collecting and studying meteorites. He gave FoxNews.com early access to the out-of-this-world research, published late Friday evening in the March edition of the Journal of Cosmology. In it, Hoover describes the latest findings in his study of an extremely rare class of meteorites, called CI1 carbonaceous chondrites — only nine such meteorites are known to exist on Earth.

Though it may be hard to swallow, Hoover is convinced that his findings reveal fossil evidence of bacterial life within such meteorites, the remains of living organisms from their parent bodies — comets, moons and other astral bodies. By extension, the findings suggest we are not alone in the universe, he said.

“I interpret it as indicating that life is more broadly distributed than restricted strictly to the planet earth,” Hoover told FoxNews.com. “This field of study has just barely been touched — because quite frankly, a great many scientist would say that this is impossible.”

“The exciting thing is that they are in many cases recognizable and can be associated very closely with the generic species here on earth,” Hoover told FoxNews.com. But not all of them. “There are some that are just very strange and don’t look like anything that I’ve been able to identify, and I’ve shown them to many other experts that have also come up stumped.”

It’s long been speculated that the building blocks of life on Earth came in part from organisms contained in meteorites that crashed here billions of years ago. This would seem to provide at least some evidence for that hypothesis.