A video aired today that purportedly showed an American being decapitated was a hoax.

The man from San Francisco, said he videotaped the staged beheading at his friendÃ¢€™s house using fake blood.

On the tape, Benjamin Vanderford, 22, sat on a chair in a dark room, his hands behind his back, trembling and rocking back and forth.

The tape showed a hand with a knife cutting at the motionless manÃ¢€™s neck but did not show any militants.

Clearly, Vanderford is a weirdo. The “Ben Vanderford for District 5” web site was, not surprisingly, overwhelmed with traffic requests when I first tried to access it a couple hours ago. It would be rather amusing under different circumstances, especially this page wherein he denies allegations that he is an android. 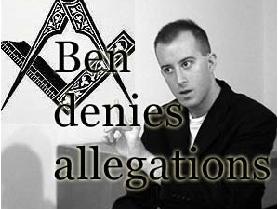 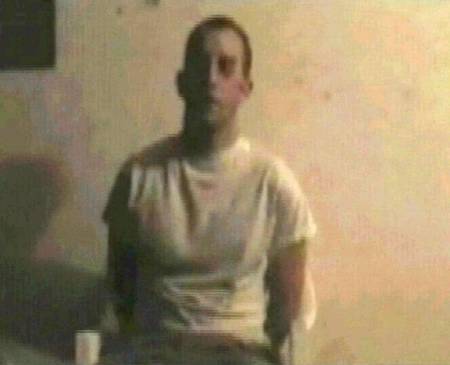 A group linked to al Qaeda ally Abu Musab al-Zarqawi has beheaded an American hostage in Iraq and posted a video of the killing on a website. “I am from San Francisco, California,” the young man in the video said, dressed in a plain beige T-shirt and seated on a chair. “We need to leave this country right now. If we don’t, everyone is gonna be killed in this way,” he said. The clearly distraught American gave his name and address before appealing to the United States to leave Iraq. The name and address appeared to match a Benjamin Vanderford, who has a U.S. website. He is described on that site as a a 22-year-old aspiring local politician and musician. “I have been offered for exchange for prisoners here in Iraq,” the terrified-looking American said in the video, rocking back and forth in his chair, his hands tied behind his back. “We need to leave this country alone. We need to stop this occupation”. The video then showed him being beheaded.

It was not immediately clear when the videotape, purportedly by the Tawhid and Jihad Group, was made or what was meant by an offer for prisoner exchange. The footage of the hostage, filmed in a dark room, alternated with photographs of what appeared to be mutilated bodies of Iraqi men, women and children. The chanting of verses from the Koran, the Muslim holy book, could be heard in the background. Reports and pictures of U.S. soldiers abusing Iraqi prisoners have sparked outrage in the Arab world and the international community, and have hampered U.S. efforts to stabilise the country amid a bloody insurgency.
Zarqawi’s group has claimed responsibility for several suicide bombings and other attacks on Iraqi and U.S. officials in recent months. It has also previously killed an American, a South Korean and a Bulgarian hostage in Iraq.

The United States said on Wednesday that the U.S.-led military coalition in Iraq would make no more concessions to kidnappers after the Philippines withdrew its troops to win the release of a hostage. “We understand that conceding to terrorists will only endanger all members of the multinational force, as well as other countries who are contributing to Iraqi reconstruction and humanitarian assistance,” the U.S. policy statement said. The coalition has faced erosion this year as insurgents test the will of governments to keep troops in Iraq by kidnapping and killing, or threatening to kill, their citizens. Kidnappers’ threats won the withdrawal of the Philippines’ 50 soldiers from Iraq last month and have forced some foreign companies to leave the country. Scores of hostages from two dozen countries have been seized in the last four months. Most have been freed but at least 10 have been killed, and at least 20 are still being held in Iraq.

The M.O. here is rather different, making me wonder if this isn’t some sort of copycat group. The shock value is certainly diminished here without the initial video announcing that Vanderford had been captured and a deadline given for some sort of concession.

The “Ben Vanderford for District 5” web site is, not surprisingly, overwhelmed with traffic requests at the moment.

Other reports on this story:

New video aired Saturday purportedly shows a San Francisco man beheaded moments after he urges the United States to end its occupation. The man on the tape identified himself as what sounds like Benjamin Vanderford, from San Francisco. He sat on a chair in a dark room, his hands behind his back, trembling and rocking back and forth. “We need to leave this country alone. We need to stop this occupation,” he said, adding that he had been offered for exchange with prisoners in Iraq. “We need to leave this country right now,” he said. “Everyone’s going to be killed this way.” The video then showed him beheaded with a large knife.

The video was titled “Abu Musab al-Zarqawi Slaughters an American.” Zarqawi is an al-Qaida linked militant whose group, Tawhid and Jihad, has claimed responsibility for numerous deadly attacks across Iraq, including the beheadings of U.S. businessman Nicholas Berg, South Korean translator Kim Sun-il and a Bulgarian man, Georgi Lazov. Their beheadings were also filmed and the video posted in the Internet.

Before he is killed, the man on the tape says he lives at 1510 Eddy Street in San Francisco. On his personal Web site, a Ben Vanderford lists that address as his home. The picture of Vanderford on the Web site closely resembles the man on the video. The site says Vanderford is running for city supervisor of San Francisco. There is no record there of him traveling to Iraq and no record that he had been captured. Unlike in previous videos of hostage killings, no militants were seen on the footage. He was also clad in a t-shirt, not the orange jumpsuit that other hostages have been dressed in. The video also showed images of disfigured and injured people in Iraq. A recording of the Quran, Islam’s holy book, played in the background.

The U.S. military in Iraq and the U.S. Embassy said they were unaware of the video and had no immediate comment.

Militants have abducted over 70 foreigners, many of them truck drivers entering Iraq with supplies for the U.S. military or contractors involved with Iraqi reconstruction efforts. At least eight of them have been killed, some by beheading. The kidnappings are a part of an insurgent campaign aimed at forcing coalition forces out of the country and scaring foreign companies away.

A much more cautious account: “The tape showed a hand with a knife cutting at the motionless manÃ¢€™s neck, but did not show his head actually removed from the body.”

They note that the video is 55 seconds and have a different name than the other stories: “there is some confusion over the hostages’ name: he identified himself as either Benjamin Dan Ford, or Benjamin Danforth.” Given that the address and picture matches up with Vanderford’s web site, it’s almost certainly him.

Fox – Web Site Shows Beheading of an American in Iraq

Northeast Intelligence Network has a photograph. They apparently have the video available to subscribers as well.

UPDATE (0848): I’ve managed to access the Vanderford website. It would be rather amusing under different circumstances, especially this page wherein he denies allegations that he is an android.

A video aired Saturday that purportedly showed an American being decapitated in Iraq was a hoax. The man shown in the video, reached by The Associated Press in San Francisco, said he videotaped the staged beheading at his friend’s house using fake blood. Benjamin Vanderford, 22, said he began distributing the video on the Internet months ago in hopes of drawing attention to his one-time campaign for city supervisor. When his political aspirations waned, he thought the video would serve as social commentary. “It was part of a stunt, but no one noticed it up until now,” Vanderford said. “I did this for a couple of reasons. One is to attract attention. But two is to just make a statement on these type of videos and how easily they can be faked.”

Sipping soda in his kitchen, a shirtless Vanderford said he spliced images he took from a Hamas Web site showing mutilated bodies. He later edited the 55 second video to downgrade the quality so it would look similar to beheading tapes distributed since the war in Iraq began. “We had to make it more lower quality to make it more realistic,” said Vanderford, who works at a bank. “That was another experiment that was part of this to see how quickly that system will spread news.”

He said he understood if relatives of those killed in Iraq thought his stunt was misguided, but he offered no apologies for the hoax. “I see how it could be considered disrespectful. But I think people, if they look at it, will understand two other big issues it brings up,” he said. “A small group of disgruntled people in Iraq or Saudi Arabia could just get more attention just by easily releasing something like I did on the Internet.”