The shocking has become routine. We're no safer because of it. 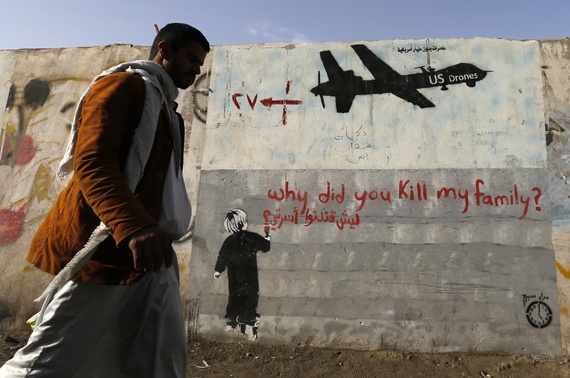 CFR’s Micah Zenko calculates that the United States has just launched its 500th drone strike. He points out how shocking that should be, even though it isn’t.

The most consistent and era-defining tactic of America’s post-9/11 counterterrorism strategies has been the targeted killing of suspected terrorists and militants outside of defined battlefields. As one senior Bush administration official explained in October 2001, “The president has given the [CIA] the green light to do whatever is necessary. Lethal operations that were unthinkable pre-September 11 are now underway.” Shortly thereafter, a former CIA official told the New Yorker, “There are five hundred guys out there you have to kill.” It is quaint to recall that such a position was considered extremist and even morally unthinkable. Today, these strikes are broadly popular with the public and totally uncontroversial in Washington, both within the executive branch and on Capitol Hill. Therefore, it is easy to forget that this tactic, envisioned to be rare and used exclusively for senior al-Qaeda leaders 13 years ago, has become a completely accepted and routine foreign policy activity.

As of [Friday], the United States has now conducted 500 targeted killings (approximately 98 percent of them with drones), which have killed an estimated 3,674 people, including 473 civilians. Fifty of these were authorized by President George W. Bush, 450 and counting by President Obama. Noticeably, these targeted killings have not diminished the size of the targeted groups according to the State Department’s own numbers.

The graphics are pretty staggering. Presuming these estimates are accurate—and that’s a big presumption—we’re getting a lot better at avoiding the killing of civilians:

The problem here is that, even if we take the casualty totals at face value, most of the non-civilians being killed probably aren’t combatants. As has been widely documenting, we’re essentially counting all military age males as fair targets. While we continue to engage in targeted strikes against suspected extremist leaders—which I support—most of the fatalities in recent years have been in so-called “signature strikes” against groups of Islamic males  who may or may not be rank-and-file members of extremist groups. And, as Zenko noted in September, there’s no evidence that we’re getting closer to our goals as a result of these strikes.

Let’s start with the initial military enemy in the global war on terrorism — the Taliban. On Oct. 11, 2001, President George W. Bush offered the leadership of the Afghan government a “second chance” — a deal whereby the U.S. military offensive in Kabul would be halted if they surrendered Osama bin Laden. The Taliban refused, and although it offered to turn bin Laden over to a third country, Bush rejected the counteroffer and the Taliban were toppled in December 2001. However, they soon reconstituted themselves around their historical strongholds in southern Afghanistan and the tribal areas of Pakistan.

Nevertheless, starting in the fall of 2002, Bush claimed repeatedly that: “The Taliban’s ability to brutalize the Afghan people and to harbor and support terrorists has been virtually eliminated.” By September 2005, Bush felt comfortable declaring: “As a result of the United States military, Taliban no longer is in existence. And the people of Afghanistan are now free.” This assertion was demonstrably false when Bush first stated it, and is even further from the truth today. The Taliban’s numbers are estimated to be between 20,000 and 60,000, comprised of members of varying commitment, and its leaders remain safely in Quetta, Pakistan. According to journalist Dexter Filkins, the Taliban has also established parallel government and judicial structures, or “shadow governments,” in all 34 Afghan provinces except for Kabul.

For the past ten years, according to the University of Maryland’s Global Terrorism Database, the Taliban has also been the single greatest perpetrator of terrorism. In 2013, it was responsible for the most terrorist attacks around the world (641), which killed the most people (2,340), according to State Department. (In second place was IS itself, with 401 attacks that killed 1,725 people.) The Pentagon’s latest bi-annual Afghanistan progress report highlights the Taliban’s unpopularity and casualty rate, and how they are “unable to turn limited tactical successes into strategic or operational gains.” But minimizing the Taliban’s reach within Afghanistan was never America’s stated objective — it was the outright defeat of the movement. And, in no way, has the Taliban been defeated, nor is its defeat imminent.

What about the terrorist organization directly responsible for conducting 9/11? In its national counterterrorism strategies, the Bush administration provided that its ultimate objective was “to disrupt and destroy terrorist organizations of global reach”(2002), and “defeat global terrorism” (2006). As Bush announced in September 2006: “We will defeat the Taliban, we will defeat al Qaeda.” The Obama administration has adhered to this comprehensive end state. In June 2011, the White House released its own National Strategy for Counterterrorism, which stated in its first paragraph a top national security priorities of “disrupting, dismantling, and eventually defeating al-Qa’ida (sic) and its affiliates and adherents.” In April 2012, then-White House counterterrorism adviser John Brennan declared: “We’re not going to rest until al Qaeda the organization is destroyed and is eliminated from areas in Afghanistan, Pakistan, Yemen, Africa and other areas. We’re determined to do that.”

By the U.S. government’s own data, these strategic objectives have all failed, despite lots of airstrikes and sustained support for local security forces. Of the four al Qaeda-affiliated groups for which the State Department has provided estimates of strength over the past five years, the only one to decrease in strength was al Qaeda in the Arabian Peninsula. All others are estimated to still have the same number of fighters as they did in 2009.

In that piece, Zenko was discussing nascent Obama administration policy against ISIS but the analysis holds against the entire war on terrorism:

In nearly every major policy speech or oversight hearing, Bush and Obama officials have repeatedly emphasized their belief of what Islam really is (peaceful and compassionate), and what it is not (violent and oppressive).

It is unclear who their attempts to discredit extremist Islam are intended to reach, but they have not succeeded in minimizing the appeal that the ideology holds for domestic and foreign jihadist fighters. Within the Muslim world, the views of al Qaeda are extremely unfavorable, and concerns about Islamic extremism have grown over the past ten years. Yet, the number of individuals willing to fight and die on behalf of that ideology has not subsequently diminished. Seth Jones at the RAND Corporation recently found that over the past four years there was a 60 percent increase in the number of radical Islamic groups while the number of extremist fighters more than doubled. This suggests that if ideology is the “center of gravity” as the Pentagon spokesperson contended, then the United States will never be able to destroy it, nor IS itself.

In my totally idiosyncratic (and informal) survey of U.S. government employees and military officers over the past two weeks, I have not communicated with one person who thinks that IS will be “destroyed,” using the military definition: “A condition of a target so damaged that it can neither function as intended nor be restored to a usable condition.” The overwhelming response has been one of eye rolling, followed by a sympathetic “well, he had to say that.” Moreover, most Americans feel the same way. According to a recent Wall Street Journal survey, 68 percent of the American people do not have confidence that the United States will achieve the goals outlined in Obama’s speech, even while 71 percent support airstrikes in Iraq, and 65 percent support them in Syria. Therefore, the United States is eagerly and collectively marching towards a destination that it knows it will never reach.

The drone policy is wildly popular because it carries essentially no risk for American military personnel* and is viscerally satisfying: we’re blowing up bad guys. Yet, there’s little evidence that we’re getting any closer to our stated goals.

_____________
*There’s a growing understanding within military circles that, while RPA pilots operate in very little physical danger, they’re actually at greater risk of post-traumatic stress than their manned aircraft counterparts. Whereas those firing missiles from an aircraft in theater see a cloud of dust, if that, our RPA pilots tend to get a direct view of the people they’re killing. But that’s not widely reported and doesn’t figure into public calculations.