This is consistent with recent polling from other organizations showing McAuliffe opening a lead. Additionally, RealClearPolitics gives McAuliffe a 7.7 point lead in its polling average, with a clear trend in the Democratic candidate’s direction: 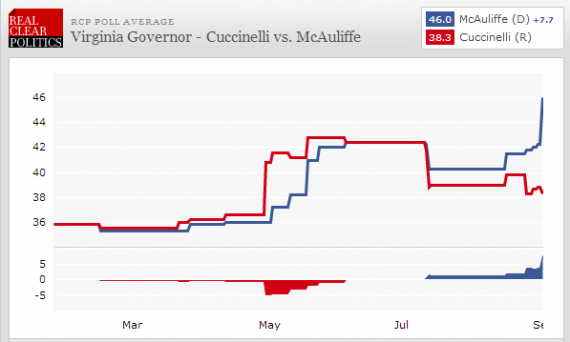 With the campaign now in full swing, I’ve noticed that Virginia Democrats have begun their expected negative campaign against Cuccinelli, focusing most especially on his positions on social issues. These ads will likely continue to roll out and will be getting a lot of airtime hear in Northern Virginia. If they’re successful in sustaining Cuccinelli’s negatives and expanding the gender gap, then Virginia Democrats may just be able to pull off a victory here.