Anti-government protests are spreading in Iran. 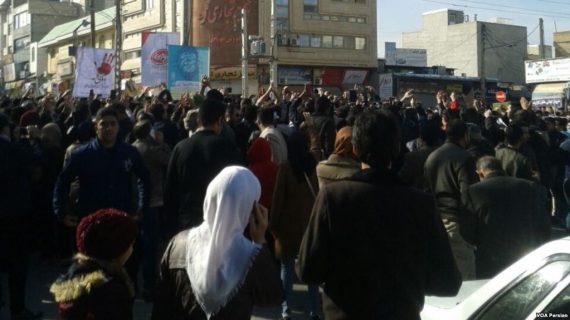 While it’s been mostly quiet in this time between Christmas and New Year’s Day, Iran has suddenly erupted in protests that appear to be spreading:

Two protesters were reportedly killed and dozens arrested during demonstrations overnight across Iran, as the nation’s interior minister warned on Sunday that protesters would “pay the price” for what he called their unlawful actions.

What began as a protest over rising prices and other economic difficulties in one city on Thursday quickly grew into a nationwide outpouring of anger against the government of President Hassan Rouhani. Protests continued for a third night on Saturday, with news reports and social media posts describing sometimes violent demonstrations in cities including the capital, Tehran.

According to the Agence France-Presse news agency, semiofficial Iranian news outlets showed footage of protesters attacking banks and municipal buildings across the nation, including a local government building in Tehran. It said 80 people were arrested overnight in Arak, a city southwest of Tehran.

“Those who damage public property, disrupt order and break the law must be responsible for their behavior and pay the price,” Iran’s interior minister, Abdolrahman Rahmani Fazli, said on state television Sunday, according to Agence France-Presse.

“The spreading of violence, fear and terror will definitely be confronted,” he said. “The vigilance and intelligence of people has always led any plot to fail.”

Later on Sunday, state television said Iran would temporarily restrict access to some social media and messaging apps, like Instagram and the messaging app Telegram, to to “maintain peace.” On Saturday, Iran successfully pushed Telegram to close the account of the Iranian channel Amad News after government officials complained directly to the company’s chief executive that the channel was encouraging violence.

The unauthorized protests have challenged the authorities, with crowds turning revolutionary slogans against the government of the Islamic Republic, which took power following a revolution in 1979.

Protesters in Tehran and elsewhere have called for the resignation of Iran’s supreme leader, Ayatollah Ali Khamenei, as witnesses have described crowds chanting “Death to the dictator” and “Clerics should get lost.”

Postings on social media showed what the posters said were protests in the city of Dorud, including bonfires in the street and graphic images of people with bloody wounds. At least one of the videos was verified by BBC Persian.

The semiofficial Mehr news agency of Iran quoted a local official as saying that two protesters in Dorud were killed during the demonstrations overnight, according to The Associated Press. There had been earlier reports of at least two protesters being shot in that city.

According to The Associated Press, Mehr quoted Habibollah Khojastepour, identified as the security deputy of the governor of Lorestan, the province where Dorud is located, as saying the two were killed in clashes during an illegal gathering on Saturday night.

“Two of our dear Dorodi citizens were killed,” he was quoted as saying, without explaining who killed them or how they died.

Many reports of peaceful protests by Iranian citizens fed up with regime’s corruption & its squandering of the nation’s wealth to fund terrorism abroad. Iranian govt should respect their people’s rights, including right to express themselves. The world is watching! #IranProtests

Big protests in Iran. The people are finally getting wise as to how their money and wealth is being stolen and squandered on terrorism. Looks like they will not take it any longer. The USA is watching very closely for human rights violations!

Philip Gordon of the Council on Foreign Relations, who previously served in the Obama Administration, argues though that the best way the United States can help the protests is by staying quiet:

One reason to worry that Mr. Trump may try to seize the moment by championing the protesters is that it has become an article of faith among President Barack Obama’s critics than in 2009 he missed a golden opportunity to do just that, when many Iranians took to the streets after a disputed election result. But it was never clear what difference American rhetorical support would have made then, other than allowing the Iranian government to depict the protesters as American lackeys, giving the security services more of a pretext to crack down violently.

Even if Mr. Obama’s support might have somehow been helpful to the Iranian opposition, Mr. Trump’s almost certainly will not be. Whatever Iranians think of their own government, they are unlikely to want as a voice for their grievances an American president who has relentlessly opposed economic relief for their country and banned them from traveling to the United States.

In addition, Mr. Trump is now threatening to “terminate” the nuclear deal (breaking with European allies and the rest of the United Nations Security Council); unconditionally supports Iran’s biggest adversaries, Saudi Arabia and Israel; and recently recognized Jerusalem as Israel’s capital, a move rejected by every other country in the region. His policies are dividing the United States from its international partners and giving Iranians reasons to unite against him. A smarter strategy would be designed to do the opposite.

To the extent that these protests are a sign of the Iranian public’s discontent with its leaders, they also belie Mr. Trump’s argument that the nuclear deal provided “urgently needed relief from the intense domestic pressure the sanctions had created,” as he put it in his October speech. On the contrary, while providing Iran some real economic benefits, the implementation of that deal over the last two years has also taken away the Iranian government’s ability to blame the United States for Iran’s enduring economic woes.

If Mr. Trump blows up the deal and reimposes sanctions, he will not be doing the opposition a favor but instead giving Iranians a reason to rally to — rather than work against — the government they might otherwise despise.

While these protests are only a few days old, they are already causing some politicians and analysts to draw paralells to the so-called Green Revolution of 2009 that occurred in the wake of controversial elections that saw opposition and moderate candidates lose out to more hardline parties and candidates. Those protests went nationwide and prompted some violent responses from the Iranian government that drew worldwide protests. Here in the United States, though, the chief impact of the protests was to become something of a political cudgel used by critics of the Obama Administration. According to these critics, then President Obama failed to speak out forcefully enough on behalf of the protesters and that this somehow undermined the protests themselves, although it’s not clear exactly how those protests would have been helped by anything the President could have said. Instead, as many of President Obama’s supporters and advisers argued at the time, any appearance that the United States was backing the protests would have been used by the Iranian government to discredit them and to justify a more widespread and violent crackdown. Quite arguably, the same concerns should exist today. There’s very little the United States can do on behalf of the protests in terms of material support, and indeed we should avoid trying to do so since that would just provide more evidence for the authorities in Tehran to point to in their effort to discredit the protests and justify a crackdown.

That doesn’tmean the United States should be completely silent, of course. Just as we did during the Arab Spring uprisings in 2011, the U.S. ought to be among the nations leading the world in some form of solidarity with these protests, and warning the Iranian government that violent crackdowns and human rights violations will only serve to isolate them from the international community. Additionally, there are two steps that the Trump Administration could take that would provide both practical and moral support for the protests. The first would be to reconsider the travel ban that bars anyone from Iran from coming to the United States. It is, to say the least, hypocritical for the Trump Administrati0n to claim support for the people of Iran at the same time that it is singling them out along with a handful of other Muslim nations and barring them from coming to the United States even in humanitarian cases. The second would be to step back from what clearly seems to be a more confrontational posture with Iran that appears to include an effort to reimpose sanctions that were lifted in the wake of the nuclear deal. This is especially true given the fact that the protest themselves appear to be rooted in the state of the economy, something the government in Tehran has long blamed on sanctions imposed by the U.S. and other countries.

In the end, what if anything these protests achieve will be in the hands of the people of Iran and whatever support they may have inside the government. Rather than reflexively trying to intervene recklessly in the process, the best thing the United States can do is let the process play out.