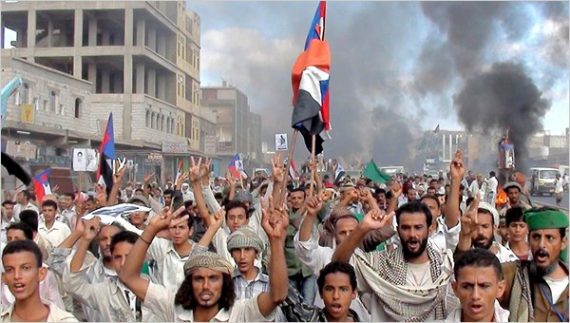 The anti-government protests that began in Tunisia and spread to Egypt, have now taken hold in Yemen:

Yemen, one of the Middle East’s most impoverished countries and a haven for Al Qaeda militants, became the latest Arab state to witness mass protests on Thursday, as thousands of Yemenis took to the streets in the capital and other regions to demand a change in government.

The scenes broadcast across the Arab world were reminiscent of demonstrations in Egypt this week and the month of protests that brought down the government in Tunisia. But as they climaxed by midday, the marches appeared to be carefully organized and mostly peaceful, though there were reports of arrests by security forces. Predictably, the protests were most aggressive in the restive south.

In Sana, at least 10,000 protesters led by opposition members and youth activists gathered at Sana University and around 6,000 more elsewhere, participants, lawmakers and activists reached by telephone said. Many carried pink banners and wore pink headbands.

While the marches were peaceful, the potential for strife in the country is difficult to overstate. It is beset by a rebellion in the north and a struggle for secession in the south. In recent years, the regional Al Qaeda affiliate has turned parts of the country, a rugged, often lawless swath of southwestern Arabian Peninsula, into a refuge beyond the state’s reach. Added to the mix is a remarkably high proportion of armed citizens.

“I fear Yemen is going to be ripped apart,” said Mohammed Naji Allaw, coordinator of the National Organization for Defending Rights and Freedom, which was one of the organizers of the protests. “The situation in Yemen is a lot more dangerous than in any other Arab country.”

He said a phrase often heard these days is that Yemen faces “tatasawmal” — the Somalization of a country that witnessed a civil war in the mid-1990s.

Part of Mr. Allaw’s worries sprung from the inability of the opposition to forge a unified message. Some are calling for secession, he said, while others are looking to oust the president through popular protests. Yet others, he said, simply wanted Mr. Saleh to undertake a series of reforms before elections in April.

Khaled Alanesi, a colleague of Mr. Allaw’s at the human rights group in Sana, said: “The opposition is afraid of what would happen if the regime falls. Afraid of the militant groups, Al Qaeda, the tribes and all the arms here.”

It’s hard to tell how related these various protests actually are. Clearly, Tunisia’s protests inspired others in the Arab world to act, but each country has it’s own set of problems and its own forces vying for control. In Yemen’s case, the danger is that instability will lead to the kind of chaos that will allow al Qaeda and similar groups to flourish they way they did in Afghanistan under the Taliban.