Are the Olympics Worth the Trouble?

In the current Newsweek, Mark Starr attempts to answer the title question, “Are the Olympics Worth the Trouble?” The trouble he refers to is the spectre of a major terrorist attack and the incredibly expensive security measures aimed at the prevention of that nightmare.

That notion inevitably raises the question: at what price might the Olympics no longer be worth it? My personal answer is a very high price indeed. I happen to believe that the Games, even with all their flaws, remain invaluable. At its very best, the Olympics provides transcendent moments-glorious, unifying and enduring snapshots of humanity-that stand in stark contrast to the baser passions that consume our world much of the time. Almost 70 years ago, it was Jesse Owens stealing the limelight amid what was supposed to be the glory of HitlerÃ¢€™s Aryan showcase. Three decades ago in Munich, we saw what was hidden behind the brutish faces of Soviet rule: the angelic face of gymnast Olga Korbut. Eight years ago in Atlanta, we watched another gymnast, Kerri Strug, land a critical vault on one good leg, revealing that girls can play hurt too. And four years ago in Sydney, I watched through teary eyes as South and North Koreans provide a hopeful vision of the future, walking in embrace into the Olympic stadium under a single unification flag.

It has become a clichÃƒ©, as well as something of a joke, to pronounce any change in our habits, lifestyle or traditions a victory for terrorism. A recent New Yorker cartoon captured that sentiment perfectly: two businessmen at lunch with one saying, Ã¢€œIf we donÃ¢€™t order this third martini, the terrorists will have won.Ã¢€ So at the risk of ridicule, I believe it will be a sad day when we let the Olympic ideals be trampled by our fears, however warranted they may be. So for my part, IÃ¢€™ll pack a lot of Pepto and perhaps a gas mask and head off to Athens, convinced it would be a lesser world without the Olympics-or at least without what it purports to represent and, on occasion, even does.

It’s been a while since I much cared about the Olympics. With the end of the superpower competition, the nationalistic aspect of the Games has lost much of its allure to me. I’m not excited when our basketball team wins the gold and am mortified when it doesn’t. The last go-round, they were held in Sydney and there was essentially no live coverage of it stateside. I literally watched none of it for the first time in thirty years or so.

So, are the Olympics worth billions in our tax dollars to preserve? Not in my judgment. It’s a private, multi-billion dollar business. On the other hand, stopping the threat of terrorists from hijacking the Olympics is worth every penny. If the Games die on the vine owing to their own hypocrisy and silliness, fine. But we can’t let them go out of fear. 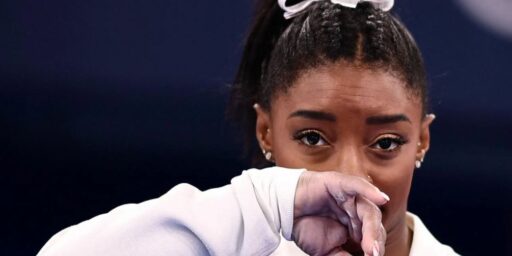 Simone Biles and the Ugly Side of Sport