It took forever for the Pentagon to finally accept having Ed Schultz’s liberal radio show on the Armed Forces Radio as a counter to conservative Rush Limbaugh (and, from what I’ve heard, they still haven’t started airing Schultz). Yet now, as soon as the Armed Forces Radio is finally approaching being fair and balanced, one openly-conservative show to one openly-liberal, they go off and try to sign Sean Hannity’s ABC radio show to un-even the score.

(And let me make clear, by saying it’s one to one, I’m being generous. Armed Forces Radio carries Limbaugh, “Dr.” Laura, and religious right freak James Dobson as well. I didn’t see any obvious lefties on their entire line-up.)

[P]erhaps the Pentagon is about to seek the rights to Air America’s broadcasts as well, and that would be quite smart of them, and in that case, I’d have no objection to them getting Hannity too, to even things out. But as it currently stands, it’s looking very 2-1, conservative to liberal, at Armed Forces Radio, and that isn’t right. Especially after they were more than happy to have zero liberal commentators to balance Limbaugh for all these years.

Propagandizing the Iraqis is one thing, but don’t our troops deserve to hear from all sides, even those troops who just so happen to be Democrats? Or aren’t Democrats in uniform as American as the rest of our troops?

AFR, like any radio station, caters to its audience. Hannity is undeniably more appealing to servicemen than the Air America crew. Indeed, judging by ratings, more appealing, period.

Further, its mission isn’t to provide all viewpoints:

Granting that I have not listened to a representative sampling of all their programs, but surely Hannity, Limbaugh, and the rest are more conducive to that mission than Al Franken and Janeane Garofalo.

American isn’t only Rush Limbaugh and Sean Hannity. And the people who bravely serve and die in the military aren’t only of one viewpoint. If there is no balance, then ALL political talk shows need to be removed from Armed Forces Radio.

Again, though, “balance” isn’t the goal. AFRTS exists to entertain the troops, give them access to the programming they miss from home, and support the DoD’s policies. Frankly, I’m not sure Ed Shultz does that, let alone the Air America team.

Also, from the AFRTS page,

Q: How are programs selected?

A: Weekly Nielsen (television) and Arbitron (radio) ratings in the United States and periodic DOD surveys are used by AFRTS to identify the most popular shows to match AFRTS audience demographics. In recent years, AFRTS has been able to acquire and air 90 to 95 percent of the top 75 U.S. prime time series. No single U.S. station or network provides a similar service.

I’m not having much luck finding recent nationwide Arbitron ratings. Here’s one listing that looks plausible, though:

One presumes that a survey of the AFRTS listening audience would produce a similar listing. Given the over-the-top nature of their shows, Savage and Stern would seem obvious nonstarters.

Update (12/3): Commenter Holmey e-mails a link to the latest ratings: 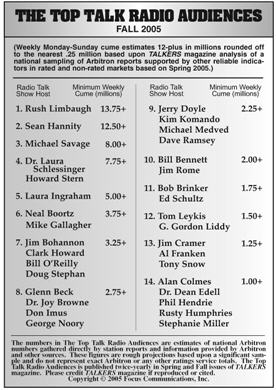 Most interesting is the ascendency of Jerry Doyle, known to some of you as “Mr. Garibaldi” from Babylon 5. He’s on during evening drive in the D.C. market and is actually quite interesting. He’s of the “both parties are corrupt and we need a third party”viewpoint that tends to annoy me but it’s an entertaining show.