The commander of Fort Knox has canceled a Ted Nugent concert after the rocker's recent rant about President Obama.

The commander of Fort Knox has canceled a Ted Nugent concert after the rocker’s recent rant about President Obama.

Co-headliners REO Speedwagon and Styx remain scheduled to perform. However, after learning of Nugent’s recent public comments about the president of the United States, Fort Knox leadership decided to cancel his performance on the installation.

Army Entertainment and the Fort Knox Directorate of Family and Morale, Welfare and Recreation remain committed to carrying out the June 23 concert, and the possibility exists that a replacement will be selected.

Nugent was scheduled to be the concert’s opening act.

This strikes me as the right call. While I think Nugent’s recent remarks were mere bluster and not an actual threat to the president–the Secret Service apparently agrees–it wouldn’t do for the United States Army to host someone who’s expressed that level of vitriol against the commander-in-chief. It’s one thing to vehemently disagree with the president–I opposed, for example, recent calls to take Rush Limbaugh off Armed Forces Radio–and quite another to say the president is an enemy of America who should be killed. 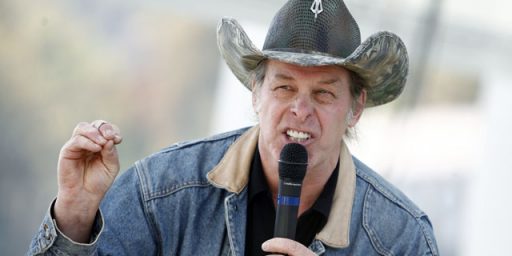