Sit-ups don’t make a soldier, the Army has decided. So its 30-year-old fitness requirements are getting a battlefield-inspired makeover.

Soon every soldier will have to run on a balance beam with two 30-pound canisters of ammunition, drag a sled weighted with 180 pounds of sandbags and vault over obstacles while carrying a rifle. Those were just some of the tests the Army unveiled Tuesday as it moves toward making its physical training look more like combat. 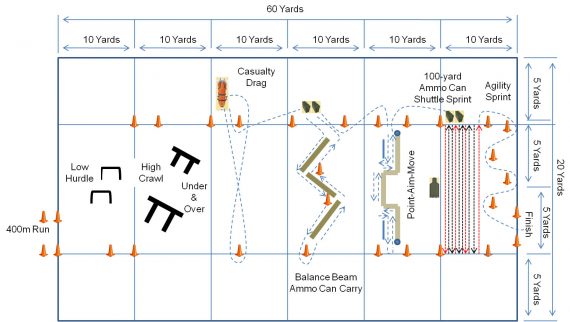 Right now soldiers have to complete sit-ups, push-ups and a two-mile run twice a year within times that vary by age and gender. Lt. Gen. Mark Hertling, the general in charge of the Army’s initial military training, said he has been working to change that test for years.

Hertling said the current test “does not adequately measure components of strength, endurance, or mobility,” or predict how well a soldier would do under fire.

A new annual “combat readiness” test includes running 400 meters — about a quarter of a mile — with a rifle, moving through an obstacle course in full combat gear, and crawling and vaulting over obstacles while aiming a rifle. Soldiers also will have to run on a balance beam while carrying 30-pound ammo boxes and do an agility sprint around a course field of cones.

Soldiers also will have to drag sleds weighted with sandbags to test their ability to pull a fallen comrade from the battlefield. The combat test might be given before deployments as well as annually, but that has not been decided.

The Army will keep elements of its old assessment in a “physical readiness” test, which adds such things as a 60-yard shuttle run and a standing long jump to one minute of push-ups and a 1.5-mile timed run. This might be given every six months, said Frank Palkoska, head of the Army’s Fitness School at Fort Jackson.

While it makes sense to have a test to assess the fitness of soldiers, this strikes me as absurd.

I was a cadet the last time the Army changed its PT test, moving from the Army Physical Readiness Test (APRT) to the Army Physical Fitness Test (AFPT) in 1986. The tests were actually identical–2 minutes of pushups, 2 minutes of situps, and a 2-mile run–but the standards radically increased. I went from being able to max situps and the run without much training to not being close on either score.

For the youngest age group (18 to 21), the pushup max went from a reasonable 58 to a holy crap 82. And I went from maxing the run at 13-something to being in wonderment at having to complete it in well under 12 minutes to get the 100 points. I had a couple runs in the low-12s as a cadet but never quite got there.

Apparently, according to various online sources, the standards have since been lowered to something more realistic for those not endowed with Olympic caliber athleticism. Indeed, if the charts I’m seeing on Wikipedia and elsewhere are right, they’ve been lowered so far that I could probably pass them now as an out-of-shape 45-year-old office worker.

But they’re now going radically in the other direction. Seriously, an average soldier is supposed to be able to do gymnastics while carrying ammo? I was never good at balance beams. And I’m trying to fathom the combat condition under which a soldier would simultaneously be firing a rifle and negotiating obstacles. It’s been a long time since my training but it seems to me that you’re either moving or shooting, but never both.

The amusing thing about all this is that it’s moving in just the opposite direction of logic. The truth of the matter is that the vast majority of soldiers do  the equivalent of office work. Even in combat zones, they’re not doing Rambo stuff.

It may well make sense to have Rangers and Special Forces types doing feats of derring-do on the PT test. But most soldiers would be better off being tested doing, say, a 5-mile march or other tests of endurance.