SFC Kristoffer Bryan Domeij was killed in action in Afghanistan Saturday, on his fourteenth combat tour.

SFC Kristoffer Bryan Domeij was killed in action in Afghanistan Saturday, on his fourteenth combat tour.

The 10-year veteran of the elite Army Rangers was killed, along with two of his comrades, in an IED attack in Afghanistan on October 22. But Domeij’s situation was special: He perished on his 14th war deployment since 2002.

Domeij’s commanding officer, Col. Mark Odom, called him “the prototypical special operations” leader whose special skills—he was one of the first soldiers qualified to coordinate Air Force and Navy air attacks from his ground position—made him a hot commodity in the war zones. Domeij, he said, was a “veteran of a decade of deployments to both Iraq and Afghanistan and hundreds of combat missions.”

It’s easy to make too much of a case like this; Domeij, after all, was a voluntary soldier and a member of an elite special operations community whose motto is “Rangers lead the way.” But a fit young person’s willingness to serve his country is not the point; the point is whether this country is abusing its fit young people’s sense of commitment. It’s amazing (and encouraging) that, for all its shortcomings and divisions, the United States still has a supply of dedicated public servants. It’s also amazing that we could exhaust our supply so dramatically that we could ask a man to spend nearly one-third of his brief life at war.

As I noted a few months back in a piece for The American Conservative (“Military Service is a Job, Not a Duty“) the problem isn’t that we’re asking our volunteer warriors to bear too heavy a burden. This was the life that he chose and he certainly knew what he was in for, re-enlisting constantly for the most arduous possible duty. Our responsibility to them is to be damned selective about going to war:

When we send them to fight for us, we owe it to them to ensure that they’re properly trained and equipped. We also owe them the best available medical care for wounds, whether physical or psychological, suffered in our service. And it’s a national duty to take care of the families they’ve left behind.

First and foremost, though, we owe it to them not to risk their lives cavalierly. They’ve signed up to put their lives on the line for their country. But they did so trusting that they’d be called upon to fight only when necessary—and, implicitly, to risk dying only for achievable objectives.

We’ve been failing them in this regard—ironically, often at their own urging. Once committed to a mission, and especially once comrades have died for the cause, warriors naturally want to stay until the job’s done. Civilians must take that decision out of their hands and not commit them to hopeless causes to begin with. 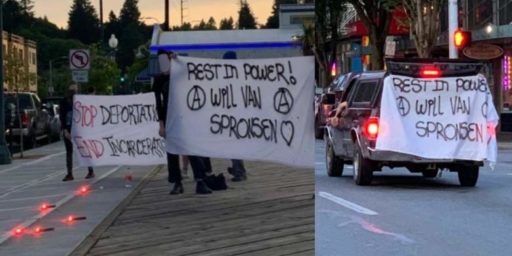