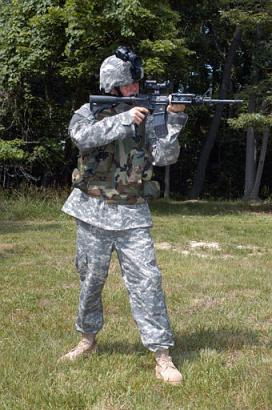 It marks the first major change in the Army uniform since 1981, said Brig. Gen. James R. Moran, who modeled the uniform for reporters at the Pentagon. He said recruits will be issued the redesigned uniform starting October 2005, and the entire Army will be outfitted by December 2007.

The uniform is being produced in a single, universal pattern to replace the two camouflage versions in current use: tan-brown for desert use and green-brown-black for woodland settings.

The pattern for the new camouflage coat and trousers is a mix of light green, tan and gray. Moran said it was designed to allow soldiers to blend into urban, desert and forest environments; it is similar to the Marines’ digital camouflage uniform except that it has no black in the pattern.

Soldiers also will get a new, no-shine, tan combat boot, and the current black boots will be discontinued.

The coat-trousers combination costs $88, compared with $56 for the current battle dress uniform.

Yikes, that’s expensive. I’ve long thought that having a battle dress uniform also serve as an everyday utility-fatigue uniform was silly. A set of the old green permapress fatigues can be had for under $20 and is considerably lower maintenance. This pattern does appear to be a significant upgrade for camouflage purposes, though, although I’m a bit skeptical of this as a desert uniform.

Now, if the Army could just get rid of those garish lime green shirts with the Class A and Class B uniforms. Given how infrequently most soldiers wear their Greens, I propose eliminating them entirely and re-instituting the Army Blue as the Class A.

The new uniform was designed in part to accommodate the new Interceptor body armor that soldiers are getting in Iraq (news – web sites) and Afghanistan for partial protection from bullets as large as 7.62mm. The Mandarin-style collar, for example, shields the neck from the Interceptor vest collar.

Moran said the Army will offer soldiers extra protection with add-on armor for the underarm area, which is not covered with protective plates in Interceptor vests. The deltoid protection will increase the weight of the armor vests from 16 pounds to 22 pounds.

About 50,000 sets of deltoid protection are to be available by the end of September.

Moran said the Army is looking for ways to protect soldiers better who risk death or injury from homemade bombs in Iraq, the weapons of choice for anti-U.S. insurgents.

“We have a clever enemy, an adaptable enemy,” he said.