I attended a debate between Glenn Reynolds, Joe Trippi, and Barry C. Lynn this evening at the National Press Club on the topic, “Do the Internet and other related technologies allow us to be more in control of our lives? Are politics, culture, and economics more responsive to individuals than ever before or is more power becoming concentrated in fewer and fewer hands?” Reason‘s Nick Gillespie and TCS Daily editor Nick Schultz were the hosts. 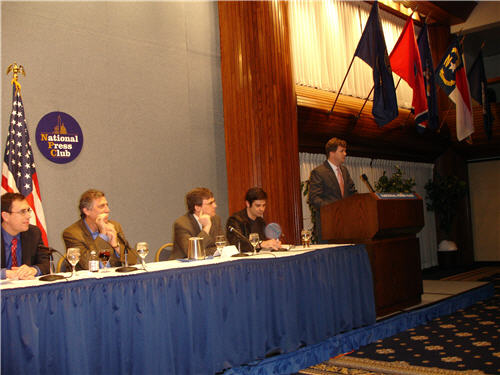 Reynolds has just published An Army of Davids: How Markets and Technology Empower Ordinary People to Beat Big Media, Big Government, and Other Goliaths and Trippi, former Campaign Manager for Howard Dean, is the author of The Revolution Will Not Be Televised: Democracy, the Internet, and the Overthrow of Everything. So, despite being on opposite sides on a whole range of issues, they were essentially in agreement in this “debate.”

The outlier was Lynn, a Senior Fellow at the New America Foundation and author, of End of the Line: The Rise and Coming Fall of the Global Corporation. As it turned out, because he was saying things that neither of the other panelists–or very many attending–agreed with, he got most of the attention during Q&A, even though he didn’t have much to say about the topic at hand. 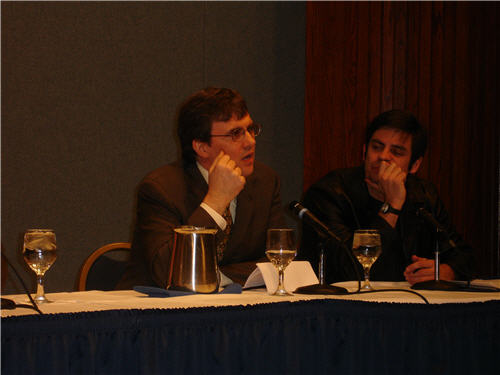 I chatted with all three. Lynn was actually much more engaging one-on-one than in the panel discussion. Trippi was also quite interesting to talk to, although I think he’s way off course in his continued optimism that a third party is about to emerge on a wave of activism from the American public. Reynolds was Reynolds, pretty much the same guy in person as in the blog and his various articles. He was also the best off-the-cuff speaker, which isn’t surprising given that he talks for a living.

I purchased a copy of Army of Davids, violating my standard rule not to pay actual money for works of non-fiction since, eventually, someone will offer me a free copy. Oddly, neither Trippi nor Lynn were offering any books, which is probably symbolic of something.

Update: Via Reynolds, I see that Age of Hooper has more coverage and photos. He’s working on audio and video as well.

Update 2: Danny Glover has extensive coverage of the panel discussion itself.