Army Aims to Catch Up on Recruits in Summer

Violent, long deployments to Iraq and a sound job market at home have combined to reduce what the Army calls the “propensity to enlist” — the percentage of young Americans willing to consider Army service — which dropped from 11 percent last year to about 7 percent this year.

Enlistment propensity has declined for at least the past quarter-century. Its causes are complex and multifaceted, ranging from the increasing returns of college education to the population growth of Latinos, who generally struggle to meet basic recruitment guidelines despite high interest in the armed forces. But, certainly, the Iraq War is a significant concern, as the “U.S. Military Image Study” suggests. Between 2000 and 2004, the percentage of youth who cite the fear of death, injury, or combat participation upon forgoing enlistment has substantially risen.

It just so happens that I examined this very issue in my “spring exercise” project. Here is a section that I prepared for a briefing book to Professor John White, Former Assistant Secretary of Defense, Manpower, Reserve Affairs, and Logistics. James can probably tell you more about it than I can (the topic was assigned to all first-year graduate students regardless of policy expertise), but I thought that I’d share it anyway. 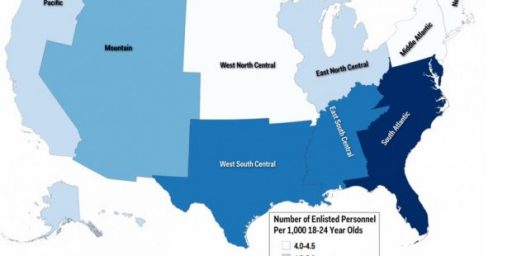