As Kagan Hearings Begin, Republicans Struggle For Line Of Attack

As Elena Kagan's confirmation hearings begin, Senate Republican's seem to have very little to hold against her. 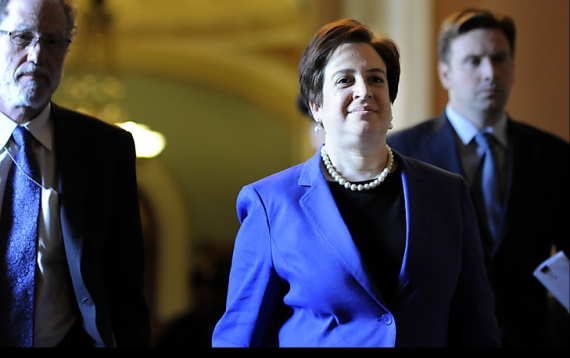 In a few hours, the Senate Judiciary Committee will begin the hearings on Elena Kagan’s nomination to the Supreme Court and Republicans still seem to be struggling to come up with arguments against her nomination:

For weeks leading up to the start of Elena Kagan’s Senate confirmation hearings Monday, Republicans have struggled to find a compelling line of attack to take against the Supreme Court nominee. But their efforts to wield an effective cudgel against President Obama’s second nomination to the country’s highest court have largely failed.

In a month of oil spills and Afghan tumult, the Kagan nomination is one effort that has gone seamlessly for the White House. In part, participants say, that is precisely because it has been overshadowed by a flood of other events that have consumed Congress and kept Republicans from mounting a more muscular front against her.

But it is also a measure of how skilled operatives have become at managing the process — and choosing nominees who are notable in part for their political blandness.

Of the efforts to fill the four vacancies in recent years, none have produced the kind of fireworks that made the nomination of Clarence Thomas so explosive or that led to the rejection of Robert H. Bork. Initial hiccups — Samuel A. Alito Jr.’s conservative record, Sonia Sotomayor’s comment extolling the virtues of a “wise Latina” — have inevitably given way to confirmation. And in Kagan’s case, there has not been a stumble of the sort that would slow down her nomination.

Republicans have tried to make an issue of her years as law dean at Harvard and her lack of judicial experience. And in recent days, conservatives have seized on a new, albeit arcane, objection: Kagan’s praise for a former president of the Israeli Supreme Court known for his activist approach to the law.

“If people understood that an American Supreme Court nominee was going to follow the example of Barak, there would be grave misgivings and probably a refusal to confirm,” Bork said last week in a conference call with reporters that was billed as a potential turning point in the nomination process.

Never mind that most Americans have never heard of Aharon Barak, the Israeli jurist to whom Bork was referring (and whose effectiveness as a political weapon is diminished further because his name resembles the president’s). Or that Bork was rejected for the court in 1987 and has served as the GOP’s go-to judicial scold ever since.

Since it seems unlikely that the average American is going to care what a Supreme Court nominee had to say about a former member of the Israeli Supreme Court, some Senate Republicans seem to think they can turn the hearings into a “teachable moment:”

Republicans, who decided early on that they stood little chance of defeating Supreme Court nominee Elena Kagan, settled instead on making her confirmation process a “teachable moment” to highlight the dangers of liberal judicial activism.

Republicans have settled on a strategy of painting Kagan, who has never been a judge, as a politically driven ideologue. They insist they haven’t ruled out a filibuster, though that seems highly unlikely.

“I think a recurrent theme will be: Here you have a person who has been deeply involved in policy-politics most of her life — without a judicial record to demonstrate that she can put that behind her on the bench,” Senate Minority Whip Jon Kyl (R-Ariz.), a Senate Judiciary Committee member, told POLITICO. “And therefore she’s got a burden of proof to find other ways to assure us that she will decide cases just based on the facts — and not just based on the politics.”

This isn’t all that different from what Republicans were saying about Sonia Sotomayor last year and it isn’t going to work any better now than it did then. Americans will pay passing attention to the hearings this week, at least to the extent that they’re not already focused on the upcoming 4th of July holiday, but unless there’s some unexpected revelation, which seems unlikely, it’s doubtful that the hearings themselves will stay in the public consciousness much past the weekend.

Elena Kagan will be confirmed, Republicans just need to accept that and move on.