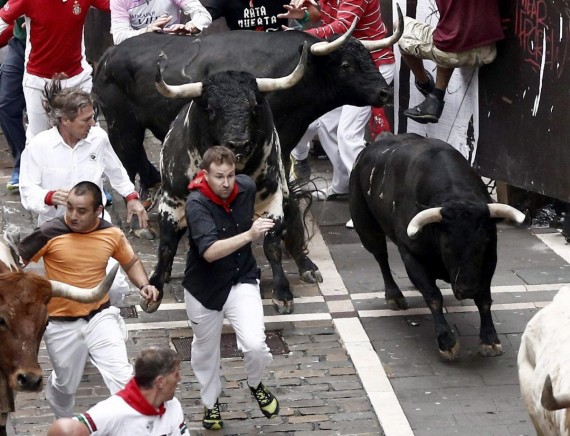 The author of a book on how to survive Pamplona, Spain’s famous running of the bulls has been, well, gored by a bull in Pamplona:

PAMPLONA, Spain— An American who co-wrote a book called “How to Survive the Running of the Bulls” was badly gored on Wednesday in the morning bull run at Pamplona’s San Fermin festival.

A Spanish man was also gored in the “encierro,” when runners in red scarves and white outfits dash through the Spanish town’s streets pursued by the huge animals.

Chicago resident Bill Hillmann, 32, tripped and fell when a bull gored him in his right thigh, according to festival website sanfermin.com.

A Hemingway aficionado, Hillmann travels to Pamplona every year to take part in the festival.

The black bull that gored him was the heaviest of the morning’s six bulls from the Victoriano del Rio ranch, weighing around 1,300 pounds.

One would imagine that this will have a negative impact on book sales.