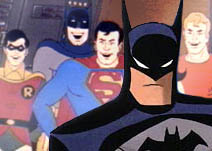 Bad cartoons tend to make bad citizens. And my generation suffered from the worst cartoons of all. Pity the poor male children of Generation X: there we sat, on Saturday mornings in the ’70s and early ’80s, clutching our bowls of Count Chocula and enduring the soul-sucking monotony of ugly Filmation cartoons populated by heroes who fought without actually fighting. You could watch cartoons for hours and never see a superhero actually sock a supervillain in the gut, or a commando pump hot lead into a live non-robot terrorist, or a ranger thrust a pointy-sharp arrow into some dragon’s malevolent guts. Preachy mini-sermons abounded, though; the Super Friends couldn’t lay a gloved fist on Lex Luthor, but they could sure manhandle those sugary in-between-meals snacks. (“Super Friends,” they called them, instead of the Justice League. The difference tells you everything you need to know about the seventies.)

I always assumed that the threat of litigation had driven violence from Saturday morning. After all, if you show Superman frying a supervillain with his heat vision on Saturday morning, then, sure enough, some idiot kid in Dubuque will fry his little brother with heat vision one fine Saturday afternoon, and then everyone loses except the lawyers.