The Pentagon is backing a massive development project financed by Marriott and others to gentrify Baghdad.

Forget the rocket attacks, concrete blast walls and lack of a sewer system. Now try to imagine luxury hotels, a shopping center and even condos in the heart of Baghdad. That’s all part of a five-year development “dream list” — or what some dub an improbable fantasy — to transform the U.S.-protected Green Zone from a walled fortress into a centerpiece for Baghdad’s future.

But the $5 billion plan has the backing of the Pentagon and apparently the interest of some deep pockets in the world of international hotels and development, the lead military liaison for the project told the Associated Press. For Washington, the driving motivation is to create a “zone of influence” around the new $700 million U.S. Embassy to serve as a kind of high-end buffer for the compound, whose total price tag will reach about $1 billion after all the workers and offices are relocated over the next year. “When you have $1 billion hanging out there and 1,000 employees lying around, you kind of want to know who your neighbors are. You want to influence what happens in your neighborhood over time,” said Navy Capt. Thomas Karnowski, who led the team that created the development plan.

But developers are clearly looking many years ahead and gambling that Baghdad could one day join the list of former war zones such as Sarajevo and Beirut that have rebounded and earned big paydays for early investors.

Spencer Ackerman is outraged at the very idea.

Your neighbors! Your actual neighbors, the ones whose country it is, experience shortages of water, electricity, fuel, cooking oil, medical care, security and more. The rise of this hotel compound will drain resources away from a desperate population.

Never, ever, let another warmonger get away with telling you that you want to end the war because you don’t care about the Iraqi people’s fate. He probably has his luxury suite already booked in the forthcoming International Zone Hilton.

I’m quite dubious of the plan and certainly wouldn’t invest my retirement savings in developing luxury resorts in the middle of a war zone. Still, the idea makes sense. Presumably, companies investing $1 billion in facilities will have a great stake in working to improve the infrastructure, security, rule of law, and other things necessary to ensuring the success of their business venture. Even for conglomerates, that’s real money.

At what point is it conscionable to build luxury hotels? Certainly, most of Cairo, Egypt is a slum by Western standards. Yet, there you will find more than a dozen magnificent luxury hotels, mostly clustered into a central zone, which cater to well-off tourists. Is that immoral? Or does it provide jobs for locals and gradually improve their standard of living?

For that matter, while America’s inner cities are a far cry from Baghdad, many of them are nonetheless impoverished, crime-ridden, and dysfunctional. Yet, almost all of them have luxury hotels, condos, restaurants, and so forth. Indeed, that’s true of our nation’s capital, where $500 a night hotels and restaurants selling $200 bottles of wine are within easy walking distance from neighborhoods none of the patrons of said establishments would venture into at night.

Wealth and abject poverty, safety and danger, and have and have not often coexist in close proximity. And the good often “draws resources away” from the bad. Why should Baghdad be any different? 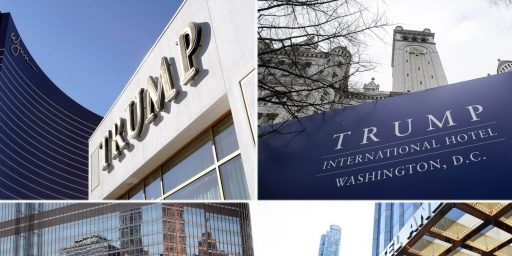