Barack Obama gave a speech at a large black church in Chicago (no, not that one) yesterday. Appropriately enough, given that it was Father’s Day, his subject was absent fathers, a subject he with which he has some familiarity.

Addressing a packed congregation at one of the city’s largest black churches, Senator Barack Obama on Sunday invoked his own absent father to deliver a sharp message to African-American men, saying, “We need fathers to realize that responsibility does not end at conception.”

“Too many fathers are M.I.A, too many fathers are AWOL, missing from too many lives and too many homes,” Mr. Obama said, to a chorus of approving murmurs from the audience. “They have abandoned their responsibilities, acting like boys instead of men. And the foundations of our families are weaker because of it.”

The speech was striking for its setting, and in how Mr. Obama, the presumptive Democratic presidential nominee, directly addressed one of the most sensitive topics in the African-American community: whether absent fathers bore responsibility for some of the intractable problems afflicting black Americans. Mr. Obama noted that “more than half of all black children live in single-parent households,” a number that he said had doubled since his own childhood.

Accompanied by his wife, Michelle, and his daughters, Malia and Sasha, who sat in the front pew, Mr. Obama laid out his case in stark terms that would be difficult for a white candidate to make, telling the mostly black audience not to “just sit in the house watching SportsCenter,” and to stop praising themselves for mediocre accomplishments. “Don’t get carried away with that eighth-grade graduation,” he said, bringing many members of the congregation to their feet, applauding. “You’re supposed to graduate from eighth grade.”

On the campaign trail, Mr. Obama has frequently returned to the topic of parenting and personal responsibility, particularly for low-income African American families. Speaking in Texas in February, Mr. Obama told the mostly black audience to take responsibility for the education and nutrition of their children, and lectured them for feeding their children “cold Popeyes” for breakfast. “I know how hard it is to get kids to eat properly,” Mr. Obama said. “But I also know that folks are letting our children drink eight sodas a day, which some parents do, or, you know, eat a bag of potato chips for lunch. Buy a little desk or put that child at the kitchen table. Watch them do their homework.”

“I know the toll it took on me, not having a father in the house,” he continued. “The hole in your heart when you don’t have a male figure in the home who can guide you and lead you. So I resolved many years ago that it was my obligation to break the cycle — that that if I could be anything in life, I would be a good father to my children.”

But he also acknowledged his own flaws as a father, citing the breakneck schedule of the presidential campaign and the rare days he spends with his children. “I say this knowing that I have been an imperfect father,” he said, “Knowing that I have made mistakes and I’ll continue to make more, wishing that I could be home for my girls and my wife more than I am right now.”

Powerful stuff, if rather obvious. Black preachers, even the likes of Al Sharpton, have echoed similar themes in front of black audiences. But Obama was speaking to a national audience as much as to the church’s congregation.

Obama is running for president, which, contrary to a questioner in a long-ago town hall debate, is not the same as our national daddy. There’s no public policy that a president can issue that will solve this particular problem. But the bully pulpit — the ability to persuade using the world’s largest megaphone — is perhaps the institution’s greatest power in domestic affairs.

In being the presumptive Democratic nominee, Obama can say things that white candidates can’t for fear of being labeled “racist.” This, more so than showing a black face to people of color around the world, strikes me as the most important aspect of Obama’s historic position. If he continues sounding this theme, he can do a lot of good over the next few months regardless of November’s outcome. And, as is rarely the cases in American politics, speaking truth to the public should be politically advantageous as well, helping him appeal to moderate white voters.

Should The Media Ignore The Fact That Hillary Clinton Will Clinch The Nomination Tomorrow? 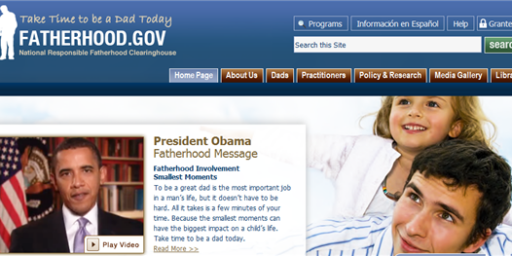 The Republican Exodus From Trump Quickly Becoming A Stampede