Senator Barbara Boxer has announced she will not run again in 2016.

California Democratic Sen. Barbara Boxer, a tenacious liberal whose election to the Senate in 1992 heralded a new era for women at the upper reaches of political power, announced Thursday she will not seek re-election to a new term next year.

A staunch supporter of abortion rights, gun control and environmental protections, Boxer has said she is most proud of the vote that she cast against the war in Iraq.

Boxer’s retirement sets off a free-for-all among California Democrats, who have been ascendant in the state for decades with few offices to aspire to while Boxer and Sen. Dianne Feinstein have held a lock on the state’s U.S. Senate seats.

The 74-year-old Boxer made the announcement in an unusual video in which she answered questions posed by her grandson, Zach Rodham. “I am never going to retire. The work is too important. But I will not be running for the Senate in 2016,” Boxer said.

That a 74-year-old has decided that she won’t, at age 76, run for a job whose tenure ends when she’s 84 would seem not the least bit newsworthy in a normal system. Alas, a shocking number of Senators have run for re-election much older than that. 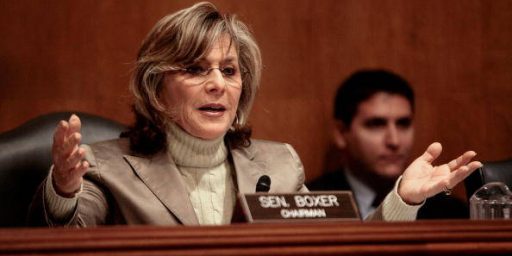