After years of investigation into alleged steroids use, baseball’s all-time home run leader Barry Bonds has been indicted. As often happens in these high profile cases, though, the charges relate to the investigation itself rather than the underlying crime.

Barry Bonds, baseball’s home run king, was indicted for perjury and obstruction of justice Thursday and could go to prison instead of the Hall of Fame for telling a federal grand jury he did not knowingly use performance-enhancing drugs. The indictment, culminating a four-year investigation into steroid use by elite athletes, charged Bonds with four counts of perjury and one of obstruction of justice. If convicted, he could be sentenced to a maximum of 30 years in prison.

Shortly after the indictment was handed up, Bonds’ personal trainer, Greg Anderson, was ordered released after spending most of the past year in prison for refusing to testify against his longtime friend.

The 10-page indictment mainly consists of excerpts from Bonds’ December 2003 testimony before a federal grand jury investigating the Bay Area supplements lab at the center of a steroid distribution ring. It cites 19 occasions in which Bonds allegedly lied under oath.

An attorney familiar with the investigation told ESPN’s T.J. Quinn that the government obtained the results of positive steroids tests for Barry Bonds during a search of BALCO facilities. The source said the positive results did not come from confidential testing conducted by Major League Baseball and the players association. In approximately 2001, MLB conducted tests to guage the level of substance problems among players. The government subpoenaed those records.

In August, when the 43-year-old Bonds passed Hank Aaron to become the career home run leader, he flatly rejected any suggestion that the milestone was stained by steroids. “This record is not tainted at all. At all. Period,” Bonds said.

Jeff Goldstein has some thoughtful comments on that point. He concludes, “[I]t’s time to have a real discussion on the ills (or pros) of performance enhancing drugs in sport. Unfortunately, I suspect we’ll have a lot of discussions about race and racism, instead.”

Quite likely. In the meantime, though, his lawyers are going in a different direction:

Defense attorney Mike Rains said he spoke briefly with Bonds but did not describe his reaction. At an evening news conference, he read a statement accusing federal prosecutors of “unethical misconduct” and declined to take questions. “Every American should worry about a Justice Department that doesn’t know if waterboarding is torture and can’t tell the difference between prosecution on the one hand and persecution on the other,” Rains said.

Sports Illustrated has extended excerpts from the indictment. The entire thing is available at Fox Sports in PDF format. It appears to be a rehash of the leaked grand jury testimony and to have nothing that wasn’t in Game of Shadows.

See Related Posts below and Dave Pinto‘s Cheating archives for much more background. 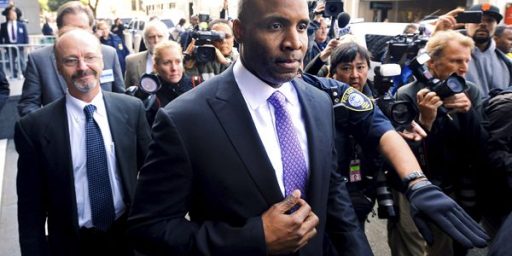 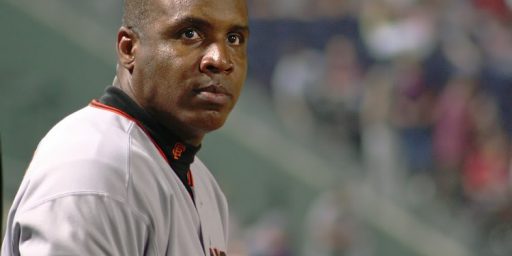