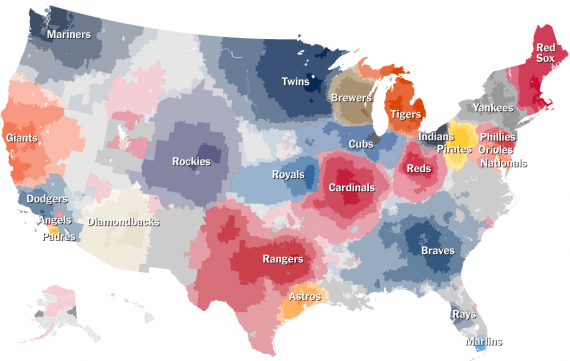 The guys at the new New York Times blog Upworthy have done some data crunching and generated a bunch of maps showing which Major League Baseball teams are most popular throughout the country:

Steve Rushin of Sports Illustrated has called the line running through Connecticut that separates Yankee fans and Red Sox fans the Munson-Nixon line. Mr. Rushin came up with the name — in honor of the late Yankee catcher Thurman Munson and the retired Red Sox right fielder Trot Nixon — in 2003, and he had to guess where the line ran: “north of New Haven but south of Hartford, running the breadth of central Connecticut.”

We don’t have to guess anymore.

Fans may not list which team they favor on the census, but millions of them do make their preferences public on Facebook. Using aggregated data provided by the company, we were able to create an unprecedented look at the geography of baseball fandom, going down not only to the county level, as Facebook did in a nationwide map it released a few weeks ago, but also to ZIP codes. We can now clearly see that both Hartford and New Haven are in fact Yankee outposts. We can also determine theprecise Chicago neighborhoods where White Sox jerseys stop being welcome and the central California town where the Dodgers cede fan favorite status to the Giants.

We’ve created two features to help readers explore the data. First is an interactive map of the United States that allows you to explore not just the most popular team in your neighborhood but also a table of the top teams for any ZIP code in the country.

In addition to the interactive map, there are also a bunch of other maps based on the data, including this one that shows us that the border between Yankees fans and Red Sox Fans runs right through the middle of Connecticut: 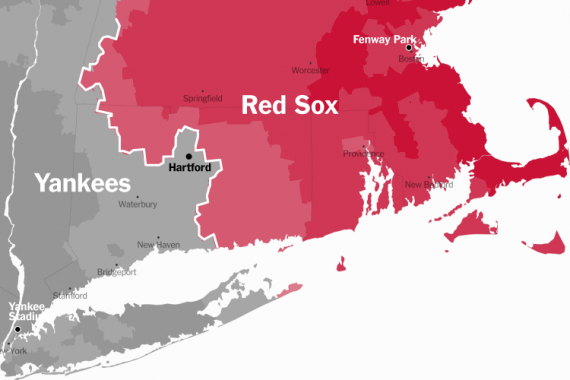 And this one that shows that the Mets aren’t even the most loved team in the neighborhood of their home stadium (grey represents Yankees, there, ummm, is no color for the Mets) 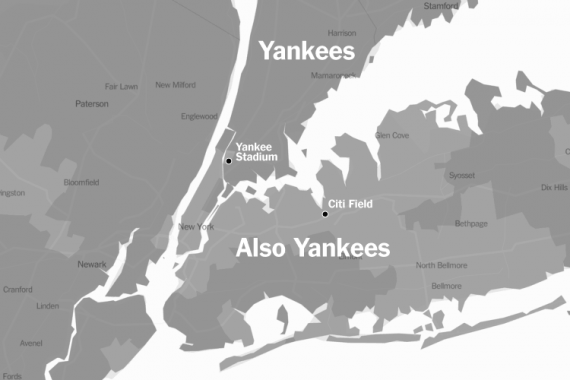 And as Kevin Drum notes, the Mets aren’t the only team left out:

The Oakland A’s have it even worse. In 94501, the home of the Oakland Coliseum, fans prefer the San Francisco Giants by a whopping 59 to 18 percent. This is spectacularly embarrassing. The Mets, after all, are at least in the same city as the Yankees, so divided loyalties are natural. The A’s are in Oakland, a different city with a culture of its own. Sure, maybe there’s no there there, but that’s a culture! And yet, even the working-class East Bay has apparently been so taken over by yuppified San Franciscans escaping sky-high rents that the A’s can’t get any love even after being canonized by Michael Lewis and Brad Pitt as the champions of Moneyball. Sad.

(The Toronto Blue Jays aren’t on the map either, but I assume that’s because the map doesn’t include Canada. I draw no conclusions about Toronto’s fan base, though I suspect we can assume it’s pretty minimal too.)

A similar map of Canada would be interesting to see. While the Blue Jays no doubt have a lot of fans in the area around Toronto, I imagine that they compete for attention against the Red Sox, Yankees, Tigers, Twins, and Mariners, just to name teams located in areas bordering our neighbor to the North.