Basil Marceaux’ appearance on a local news show touting himself in the Tennessee Republican primary for governor is apparently becoming the stuff of internet legend:

Jeff Woods provides the backstory if, like me, you’ve missed it:

He’s Basil Marceaux, the forgotten candidate in the GOP governor’s race—forgotten, that is, until his stunning appearance a week ago on Channel 4 in which he stood and swayed, possibly drunk, in front of a brick wall and promised to rid the world of goldfinch flags, among other things. Instantly, Marceaux catapulted to Internet fame. The YouTube of his performance is crackling through the ether like nobody’s business. “Hi I’m Basil Marceaux dot com,” he began, and the rest is history. Yes, Basil Marceaux has gone viral.

Oh sure, bloggers poked fun at Marceaux at first. Wonkette kicked it off. He wants to ban traffic stops, which he equates with slavery, and he promises: “VOTE FOR ME AND IF I WIN I WILL IMMUNE YOU FROM ALL STATE CRIMES FOR THE REST OF YOU LIFE!”

“What can be made fun of first? We just want to live in this man’s brain forever,” Wonkette raved, labeling Marceaux “the oracle of Tennessee.”

But then something changed in the collective thinking: “Eventually, as with Pabst Blue Ribbon, Basil Marceaux became so ironically popular, people forgot they liked him ironically. They started taking him seriously,” New York magazine’s Daily Intel observed.

Now headlines like these are popping up: “Meet Gubernatorial Candidate Basil Marceaux: Proof America’s Democracy Is Still Healthy,” “Meet Basil Marceaux, a Political Candidate for Our Time” and “Meet Basil Marceaux Dot Com, Tennessee’s Next Governor.” Not since Barack Obama has a candidate used the Internet so masterfully. Can Marceaux pull a miracle and snatch away victory on Aug. 5? That’s the question everyone is asking now.

If Rod Blagojevich, Jesse Ventura, and Kathleen Blanco can get elected governor, there’s certainly hope for the likes of Marceaux Dot Com. 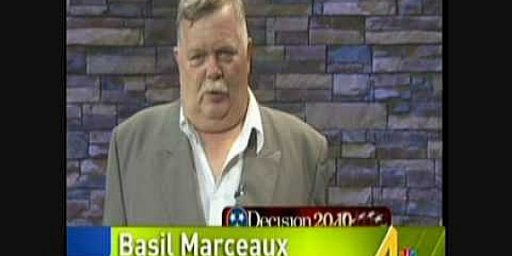