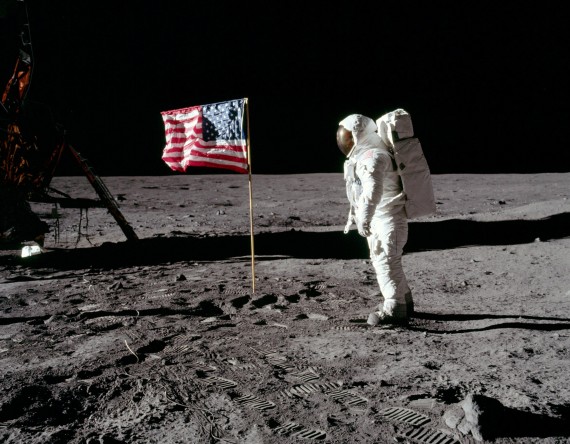 If two Congresswomen get their way, the site where Apollo 11 landed on the Moon would become a National Park:

The site of man’s first lunar landing could join battlefields, presidential birthplaces and other major American historical sites on a roster of protected places if two Democrats have their way.

U.S. Reps. Donna Edwards of Maryland and Eddie Bernice Johnson of Texas have proposed legislation that would designate artifacts at the site of American moon landings as comprising a National Historical Park, citing potential commercial traffic on the moon that could damage the areas.

Apollo 11 astronauts Neil Armstrong and Buzz Aldrin were the first to walk on the Lunar surface in July 1969.

Subsequent moon flights landed in other areas and equipment from all of the space missions, which ended in 1973, remain on the moon’s surface. These include the spidery bottom halves of lunar landers, flags and even a moon car.

“As commercial enterprises and foreign nations acquire the ability to land on the moon it is necessary to protect the Apollo landing sites for posterity; and establishing the Historical Park under this Act will expand and enhance the protection and preservation of the Apollo lunar landing sites and provide for greater recognition and public understanding of this singular achievement in American history,” the legislation reads.

The bill apparently only applies to the American equipment left behind on the Moon, and not the lunar surface because, under the terms of  a treaty adopted in 1979 to which the U.S. is a signatory, no nation can lay claim to the Moon as national territory of any kind. Practically, of course, this doesn’t mean much of anything until the U.S. Park Police establish an Astronaut Corps.