ABC News’ Sarah Amos reports that former President Bill Clinton — despite myriad promises he would stop assailing his wife’s opponent given how it has backfired on her — upped his harsh attacks today in Tyler, Texas.

“There are two competing moods in America today,” Clinton said. “People who want something fresh and new — and they find it inspiring that we might elect a president who literally was not part of any of the good things that happened or any of the bad things that were stopped before. The explicit argument of the campaign against Hillary is that ‘No one who was involved in the 1990s or this decade can possibly be an effective president because they had fights. We’re not going to have any of those anymore.’ Well, if you believe that, I got some land I wanna sell you.”

Obama campaign spox Bill Burton tells ABC News in response, “It appears that the man who once told us ‘Don’t stop thinking about tomorrow’ has changed his tune and is now singing ‘Yesterday’ everywhere he goes.”

And Clinton’s attack here is nonsensical. Obama’s line against Hillary Clinton is that she’s divisive and has consistently supported failed policies whereas he’s a consensus builder with a new strategy. 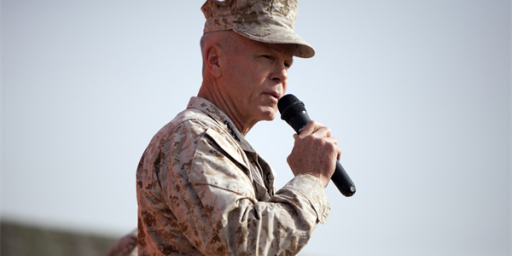 The Commandant Didn’t Say What Everyone Says He Said