London — Biometric passports, described by some as a global identification card, are just around the corner — and it could mean easier travel for business travelers or a hassle for others. Viewed as an important tool for tracking potential terrorists and illegal immigrants, your personal data could soon be made available to authorities you are unaware of. “[Travelers] will be surprised at how easily they can become the subject of a criminal investigation, just because they have left their fingerprints inside a bank that was robbed two hours later,” Thilo Weichert of the German Data Protection Association told CNN. “They would then have to prove their innocence, and the whole principle that the burden of proof lies with the prosecution could be turned upside down.”

Well, no. It’s conceivable that adding more people’s fingerprints to government databases would give police more leads to pursue. But being questioned about a bank robbery because one’s fingerprints were found at the bank is hardly tantamount to having to prove one’s innocence.

Regular travelers may get snared up more regularly in security measures aimed at enforcing European border protection. “Initially, new measures may slow security and passport checks at airports, as it will take time to come into effect,” says Sajjan Gohel from the Asia-Pacific Foundation. “Measures will be more sophisticated, but less physically present … it depends on how each country will control passengers.”

Your information could be shared among European countries to track suspicious movements. Spain, France, UK, the Netherlands, Germany and Italy have been leading the way.

Again, this hardly seems particularly intrusive. I have to pass a biometric (fingerprint) scanner to get into my office building. Sometimes, it’s aggravating because the machine is fallible. I still find it far preferable to metal detectors, wanding, and the other more intrusive measures that we have to endure at airports (or my building if without an access card).

Once the bugs are worked out of this system, it will almost certainly be a major improvement over the status quo. Fear of having one’s fingerprints in a computer somewhere are in the same category over the “national ID card” worries that seem to plague some libertarians. The ability of government to track us is a fact of life. We might as well make it less annoying. 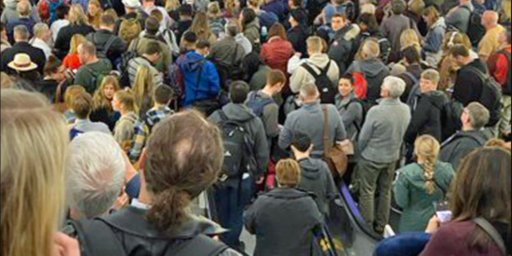