The Frontier Post has uncovered another sinister plot hatched by the Whitehouse;

“The government and media should play their role in creating awareness among the masses regarding this international conspiracy against this country’s poultry industry,” implored Dr. Saeed, president of the Poultry Doctors Association at the Peshawar Press Club.

He was flanked by the president of the Poultry Farm Association, Fazal-e-Malik. “The rumors of bird flu are being spread by an American company owned by Defense Secretary Donald Rumsfeld, to boost U.S. sales of costly medicines,” the two said.

“They spread these rumors not only in Pakistan but across the world, to sale the medicines of this company. And the money generated through the sales of these medicines is used to make the latest weapons being used against Muslims,” they claimed. A large number of poultry farm owners and doctors were present on the occasion. They ate chicken and offered meals to the media men, saying that no bird flu virus has been detected in the province. 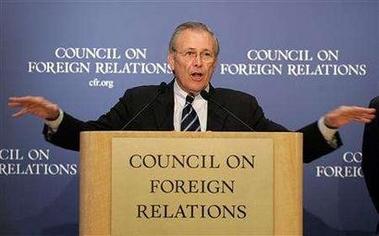