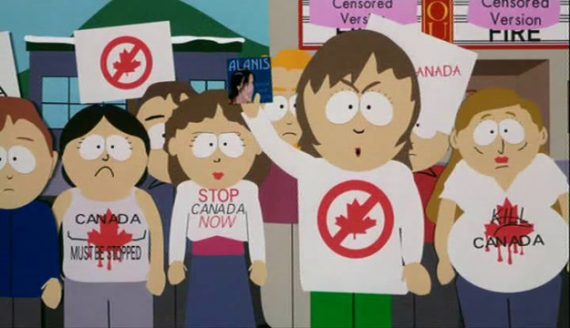 The latest revelations from the Wikileaks State Department document dump include the fact that our neighbors to the north aren’t as happy with us as we’d like to believe:

In early 2008, American diplomats stationed in Ottawa turned on their television sets and were aghast: there was an “onslaught” of Canadian shows depicting “nefarious American officials carrying out equally nefarious deeds in Canada,” from planning to bomb Quebec to stealing Canadian water supplies.

In a confidential diplomatic cable sent back to the State Department, the American Embassy warned of increasing mistrust of the United States by its northern neighbor, with which it shares some $500 billion in annual trade, the world’s longest unsecured border and a joint military mission in Afghanistan.

“The degree of comfort with which Canadian broadcast entities, including those financed by Canadian tax dollars, twist current events to feed longstanding negative images of the U.S. — and the extent to which the Canadian public seems willing to indulge in the feast — is noteworthy as an indication of the kind of insidious negative popular stereotyping we are increasingly up against in Canada,” the cable said.

A trove of diplomatic cables, obtained by WikiLeaks and made available to a number of publications, disclose a perception by American diplomats that Canadians “always carry a chip on their shoulder” in part because of a feeling that their country “is condemned to always play ‘Robin’ to the U.S. ‘Batman.’ ”

But at the same time, some Canadian officials privately tried to make it clear to their American counterparts that they did not share their society’s persistent undercurrent of anti-Americanism.

In July 2008, Canada’s intelligence service director, James Judd, discussed a video showing a crying Omar Khadr, then a teenager and a Canadian detainee at the prison at Guantánamo Bay, Cuba. Mr. Judd “observed that the images would no doubt trigger ‘knee-jerk anti-Americanism’ and ‘paroxysms of moral outrage, a Canadian specialty.’ ”

A cable that briefed President George W. Bush before a visit to Ottawa in late 2004 shed further light on the asymmetrical relationship with Canada — a country, the embassy wrote, that was engaged in “soul-searching” about its “decline from ‘middle power’ status to that of an ‘active observer’ of global affairs, a trend which some Canadians believe should be reversed.”

How they’d go about doing that is somewhat unclear.