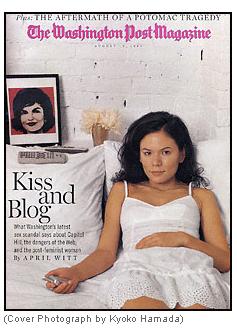 The instant message blinked on the computer at Jessica Cutler’s desk in the Russell Senate Office Building. “Oh my God, you’re famous.” Before she could form the thought — “famous, cool” — or puzzle how she, a lowly mail clerk, had escaped obscurity, a second instant message popped up on her screen. Startled, Jessica recalls, she began to curse. “Your blog is on Wonkette,” the message said. Jessica’s blog (short for “Web log”) was the online diary she had been posting anonymously to amuse herself and her closest girlfriends. In it, she detailed the peccadilloes of the men she said were her six current sexual partners, including a married Bush administration official who met her in hotel rooms and gave her envelopes of cash; a senator’s staff member who helped hire her, then later bedded her; and another man who liked to spank and be spanked. Wonkette is a popular online gossip column that was read by lots of Jessica’s friends and Capitol Hill co-workers, including some of the men in her blog. The messages warning Jessica that her private little joke had just gone very public came from a girlfriend over on the House side. Reading it, Jessica says, she was too stunned to wonder how Wonkette had discovered her blog. Instead, the portion of Jessica’s brain that had evolved to help humans survive marauding mastodons screamed: Kill the blog! Kill the blog!

Typing and clicking her mouse at a desperate pace, Jessica logged on to blogger.com, the electronic bulletin board where she’d posted her sexploits under the pseudonym Washingtonienne, and deleted her blog, hoping she’d blown her diary into oblivion. She says she barely breathed as she closed out blogger.com and summoned Wonkette.com onto her screen. There it was: a teasing item noting that an unnamed staffer for a certain Midwestern senator was surely going to get a book contract out of her X-rated blog. The gossip columnist offered her readers a link so they could read the sex diary for themselves. Jessica clicked on the link. “Page not found,” came the reply. A reprieve. Maybe nobody on Capitol Hill had read or copied her blog before she’d deleted it. Maybe nobody would figure out that Jessica was the staffer who wrote it. Maybe this was no biggie.

A few minutes later, she noticed one of the senator’s senior aides standing a few feet away, glaring. This was the woman Jessica says set her up on her first date with the committee staffer. In her blog, Jessica breezily referred to her as a pimp. Now, the senior aide Jessica had called a pimp looked as if she wanted to rip Jessica’s head off. “You are the sorriest excuse for a human being,” Jessica remembers the woman shouting. “You are worthless.” The woman and the committee staffer both declined to be interviewed for this article through Mike Dawson, DeWine’s director of communications. Dawson declined to publicly discuss the accuracy of Jessica’s blog or her account of what happened after it became public. But, according to Jessica, the woman continued berating her until Jessica asked meekly, “What should I do?”The woman told Jessica she should pack up and leave before she had her thrown out. “You better hope I never see you outside this building,” Jessica recalls her saying.

This was turning out to be a really lousy 26th birthday. Jessica tottered down the Russell Building’s marble hallways atop the cute, nude-colored sandals that she liked to think made her legs look longer and sexier. She tugged forlornly at the cardigan she wore to cover her strapless pink birthday-girl-going-out-tonight dress. She felt ill, she says. By the time she reached her girlfriend’s office on the House side, her stomach was heaving and her throat was so constricted she could barely speak. “I’m fired,” she mouthed silently at her friend. “Oh my God, you need a drink.” A few minutes later, Jessica and her friend slid onto stools in the cool dimness of Bullfeathers, a popular Capitol Hill watering hole. Jessica ordered a Southern Comfort. It was the middle of the afternoon on May 18. “What happened to you today?” the bartender asked. “I got fired. I lost my boyfriend and my job, and it’s my birthday,” Jessica remembers telling him. “How did you get fired?” the bartender wanted to know. “I wrote an X-rated blog,” Jessica said. The bartender looked puzzled. “What’s a blog?” he asked.

Soon, the answer to that question would be writ large, not only across Washington, but around the world. The Times of India dubbed her the “New-insky.” Jessica’s unapologetically snarky chronicle of her busy sex life, her audacious refusal to keep the pawing patriarchy’s dirty secrets, her contempt for honest but unglamorous public service, her cynical wit and sexy looks would combine with the power of the Web to launch her into low-orbit celebrity. She posed for Playboy in a pictorial that will run this fall, just in time for the election. Book agents pursued her, and a literary bidding war netted her a six-figure book deal. “It’s more than I probably deserve,” she says. “Ha! I’m sure a lot of people will agree.”

Lots more at the link. It is one depressing story.