Bloomsday Honors Book No One Reads NPR has an amusing bit on “Morning Edition” by Rob Gifford on Bloomsday, the annual festival wherein “Thousands of people descend on Dublin each June 16th to celebrate Joyce’s epic novel Ulysses by recreating the events in the book. The novel chronicles the passage of Leopold Bloom through Dublin on a single day — June 16, 1904 — a day, as Bloom says, that’s a ‘chapter of accidents.'”

The upshot is that the language and structure of the book is so inaccessible to modern English readers that most of the celebrants admit to never having read the book or to having tried but given up.

Ulysses, it seems, is a book people want to have read.

There’s nothing wrong with that, I suppose, and any excuse to travel to Dublin for a day of merrymaking is likely as good as any.  But it’s an amusing concept, nonetheless.

What other books fall into this category?

In “Born Yesterday,” Alexis de Tocqueville’s Democracy in America was famously revealed to be such a book.  The Bible, perhaps? 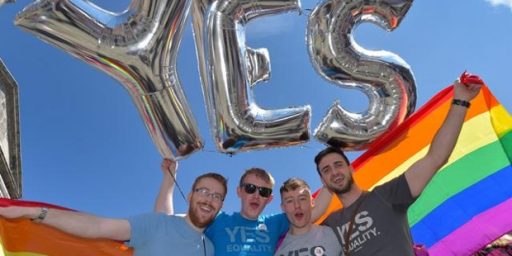