Both campaigns are trying to set the stage for Wednesday's debate. 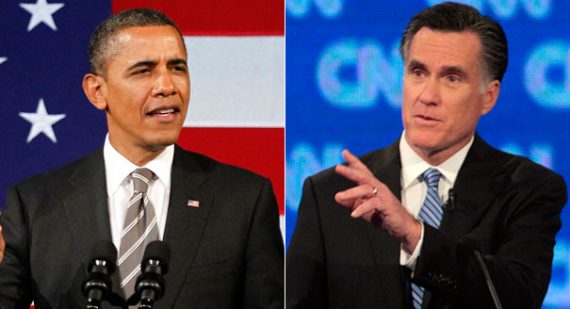 With four days to go, the debate expectations game is going full force:

BOSTON — Ripping the stuffing out of your opponent means it is another day on the campaign trail.

But suddenly changing course to praise the other guy’s experience, know-how and oratorical brilliance can mean only one thing: Presidential debates are coming up, and it is time to lower expectations for your campaign and raise the bar for your opponent. This way viewers will be unexpectedly surprised and score your candidate the winner.

Thus on Thursday did a senior adviser to Mitt Romney declare President Obama ”a uniquely gifted speaker” and “one of the most talented political communicators in modern history.”

The adviser, Beth Myers, wrote in a memo to Republican surrogates that for Mr. Obama the first debate with Mr. Romney on Wednesday “will be the eighth one-on-one presidential debate of his political career.”

“For Mitt Romney, it will be his first,” she added in the memo, first obtained by CNN.

Do not try selling that story to Mr. Obama’s team. The president’s senior adviser David Axelrod made excuses that Mr. Obama has been too busy running the country to prepare for a debate and painted a gloomy scenario.

“First, just as he was in the primaries, we expect Mitt Romney to be a prepared, disciplined and aggressive debater,” Mr. Axelrod wrote in a memo on Friday to “interested parties.” “Second, debates — and particularly the first debate — generally favor challengers. Five out of the last six challengers were perceived to win the first debate against an incumbent president.”

Twisting the knife of sky-high expectations, Mr. Axelrod added, “Maybe this is why the Romney campaign has so confidently predicted for months that he will turn in a campaign-changing performance such as Ronald Reagan’s in 1980.”

And Jennifer Granholm, the former Michigan governor who fired up Democrats at their convention last month, was suddenly not so optimistic this week, predicting flat-out “the president is going to lose the first debate next week.”

“Mark my words,” Ms. Granholm said on her Current TV show, “The War Room.” ”First off, he’s obviously a brilliant man, but the president is not a great debater. You know it, you saw him hemming and hawing in debates four years ago.”

This is a quadrennial game in Presidential politics. Representatives of both candidates, no matter who those candidates happen to be, do their best in the run-up to a debate to emphasize how experienced their opponent is at debating and how much of a formidable a opponent he or she is going to be. The fact that this is happening at the same time that the respective campaigns are essentially pushing the idea that their opponent is essentially incompetent may strike some people as ironic, but the campaigns are apparently able to pull of these seemingly schizophrenic messages with incredible ease. I

It’s all tied in, of course, with the way the media treats political debates these days. Instead of concentrating principally on what the candidates actually said in response to the questions asked, what you see the talking heads concentrate on in the immediate aftermath of a debate, especially at the Presidential level, is the rather odd question of who “won” the debate. News networks will run incredibly unreliable “flash” polls that will ask the question, many if not all of them will convene focus groups made up of undecided voters who will watch the debate while registering their response on a meter of some kind that is supposed to indicate what they think about what is being said at a given point in time, and far too much attention will be paid to the question of which candidate made “mistakes” and which one got off the best zingers, as if being able to make a joke like some guy doing the Catskills in the 1940s is a way to determine how good a President they will be.

After the debate is over, of course, both sides will be taking a completely different tack. They will be in the media spin room telling reporters that their candidate clearly “won” the debate and that his opponent pretty much imploded on stage. The real determination of the “winner,” though, will end up being largely controlled by the pundits who comment on the debate after its over. Conventional wisdom tends to set in fairly quickly on events like this, and by the time the night is over on October 3rd there will be political writers pounding their keyboards and making their case for how either Mitt Romney or President Obama “won” the debate. Once that happens, it will be very hard to dislodge the conventional wisdom unless polling after the debate indicates that the public has reacted differently to what the candidates said.

My guess is that, absent a massive gaffe on his part, the political media is likely to be rather generous to Romney in the evaluation of his debate performance. This won’t- happen because they’re particularly fans of Mitt Romney, but because it’s in their interest in keeping the horserace alive. If he does well enough, you’re also likely see people start talking about the “Romney comeback,” and we might even see that reflected in the polls. Indeed, The Atlantic’s Robert Wright has already sketched out what a potential Romney comeback narrative might look like, and it’s not entirely implausible to think that this is what we might hear from the media over the next 31 days or so as they try to maintain our interest.

Let’s be honest about it, though. Both of these candidates are going to walk onto that debate stage on Wednesday night well prepared. By some accounts, Mitt Romney has been through many mock debates, either full or partial, with his stand-in for Barack Obama Ohio Senator Rob Portman. For his part, President Obama will be taking several days off the campaign trail at a resort in Nevada to do his debate preparation with John Kerry, the stand-in for Mitt Romney. These are also both two very intelligent men who are unlikely to melt under the lights of the television cameras. Mitt Romney has been through two rounds of Presidential primary debates now and likely very familiar with what he has to do at this point. Similarly, President Obama, while not always the best in a one-on-one debates with Hillary Clinton and John McCain, is no slouch himself. Absent some disaster, it’s more likely than not that the debate will be a draw, which probably ends up helping the President because he’s the candidate in the lead at this point.

At the same time, though, these three debates will be the first opportunity for most of the American people to see both of these men together on a stage answering questions. To the extent that there are still undecided voters out there, they are likely to have their questions answered by the time this whole process is over. That’s why these debates are far more important for Mitt Romney than they are for President Obama. The President has already closed the deal with the American public, Romney has the far more difficult task of giving voters a reason to change horses. It’s something that Ronald Reagan and Bill Clinton succeeded at, but I kind of doubt that Romney will be able to do it.