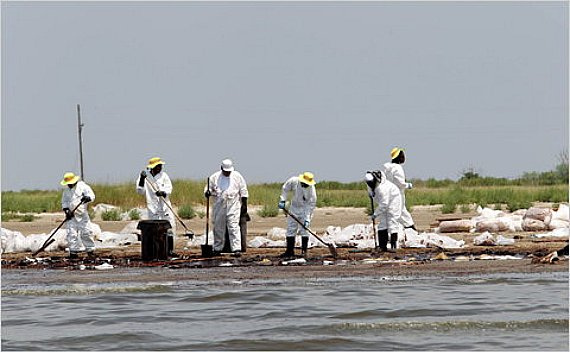 On several occasions since oil started coming close to the Gulf Coast, members of the media have complained that they were being prevented from fully covering the story by BP workers or private security guards. When ABC’s Jake Tapper mentioned this to Admiral Thad Allen, the White House’s “man in charge” of the oil spill crisis, Allen said he would immediately order “uninhibited access” to all aspect of the cleanup efforts, a promise which BP said it would abide by. Only a few days later, though, ABC reporter Matt Gutman reported being “hassled” by a BP-hired security guard while doing a report from Grand Isle Beach. Now, a local New Orleans television station is reporting the same sort of harrassment and it’s become clear that Allen’s promise of “uninhibited access” isn’t exactly being honored by BP and it’s contractors:

Private security guards patrolling an oil-stained portion of Grand Isle attempted repeatedly to prevent a WDSU news crew from walking on a public beach and speaking with cleanup workers — a confrontation that followed a BP corporate promise not to interfere in such a manner.

It was the second day in a row WDSU News anchor Scott Walker was approached by hired security in the area.

On Friday, he told the guards he intended to ask contracted clean-up crews about their efforts while workers were on their breaks. The guards told Walker he could not question the workers and was not allowed on the public beach.

Jefferson Parish sheriff’s depuies eventually intervened and Walker asked a group of workers if they wanted to talk. The guards followed Walker to a tent where the workers had gathered and told them they didn’t have to speak if they didn’t want to.

The workers declined to discuss their efforts.

Nobody is required to to talk to the press, of course, but the the extent to which a cone of silence seems to have been thrown over almost all aspects of BP’s contributions to the cleanup effort seems to be more than just coincidental and, along with reports of workers being bused in for a photo op while President Obama was in town, it makes one wonder just how serious BP is about the cleanup effort.

The press shouldn’t be getting in the way of the cleanup effort, obviously, but BP’s statement on the matter seems to be a subtle instruction to it’s workers and contractors not to cooperate:

Recent media reports have suggested that individuals involved in the cleanup operation have been prohibited from speaking to the media, and this is simply untrue. BP fully supports and defends all individuals rights to share their personal thoughts and experiences with journalists if they so choose.

It is extremely important that every individual is aware of BP’s position to prevent further misunderstanding and miscommunication. They should also be aware that they are under no obligation to speak to media and may refer journalists to the BP press office.